I am writing this topic in reason to report the result of the game, which was played on 27 of June, 2020 and finished with incorrect result.
Game ID is 5EF676CB46920C2C. Rating type: Skirmish. Game type: conquest.

Game was played fair and finished correct. Below is given the description of the situation.
After one of attacks player Bilge gave his empire to Tedere. Player Tedere decided to quit the game after another 10 seconds (you can see it in the given screenshot). So as we see players Tedere and Bilge lost and quit the game, but in ranking result it shown that they won and the opposite team lost.

This is incorrect result and it should be fixed or canceled. In future this bug should be somehow fixed to prevent such situations.

WrongResult.e2s
This is the playback of reported game
(1.69 MiB) Downloaded 1 time 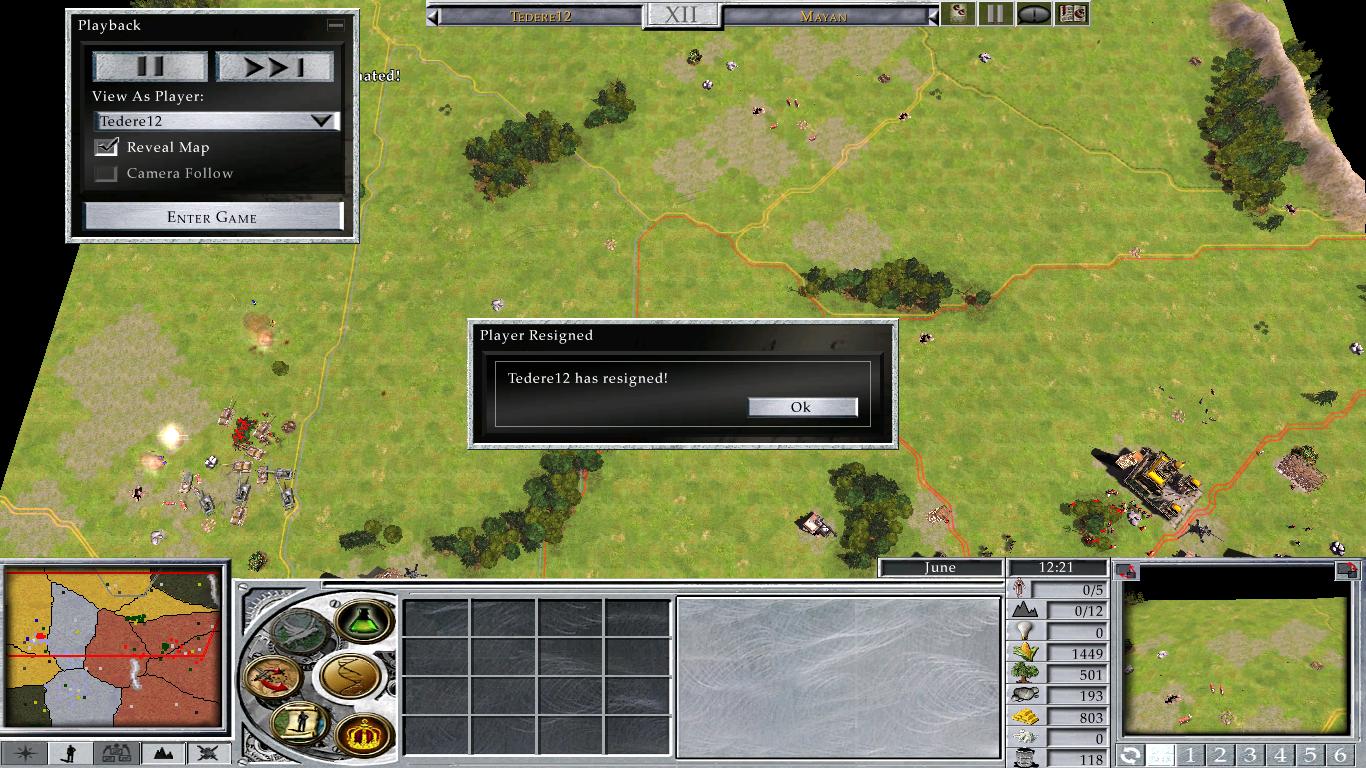 The last game update request has came from player uRs..Batu.

The Ministry does not refund incorrectly counted points, the statement of this decision can be read here: viewtopic.php?p=24352#p24352

Dr.MonaLisa wrote: ↑
03 Jan 2019, 21:55
Please note that it's only the first-time exception, and such refunds won't be issued in the future.
- Although a lot of things have been done (session IDs system, etc.) the rating system on EE2.eu Lobby is still in the "BETA" stage. Until it has status "Stable" everything is possible, including incorrect counting or missing games. This is hard to verify and the Department of Control will not issue points refunds for all games.
- Game crashes can be caused by users intentionally by editing the game process memory (for example with programs like Cheat Engine). Because of that it's impossible to verify reliability of those reports.
- If the problem (game crashes) is repeating - please visit the Support Chat in the UP1.5 Launcher. We will generate checksums of EE2 files and try to find a solution.

Besides the mentioned reasons, every database modification is extremely time consuming and dangerous for the stability. A singe mistake could fully destroy player's statistics and repairing it could take even more time. It's not about just changing the points number, but also editing the received game log (so it wouldn't appear after the possible Rating System re-calculation), Rating System Log table, Players Statistics Table, Leaderboards Table and few others that I can't even remember now. And all this had to be repeated as many times as players in game. It can't be refereed to situations where I sometimes change points for a "joke", because even this method is auto-repairing itself every few minutes, by the running Rating System scripts that take care of possible violations.

Sorry, but I don't have time for things like this, especially when it's a request from a game with well-known laggers, and players who lose their connection every second game. Like seriously, starting a rated game with for example "uRs..Batu" is like a jumping to the lava with intention of a bath.
Best regards,
Dr.MonaLisa
Ministry of Game Affairs
Department of Control and Complains
Top

Yes, those reasons are right. Laggs, crushes and other things can make such bugs.
I am not telling you to waste your time on this. Just wanted to say if the game will become more popular, such problems can occur more often and one of the possible options to resolve such problems is to appoint some person (for example Minister), who would be responsible for this. He should watch playbacks and make relevant decisions to change results of match or not.
Top

The biggest problem is a technical implementation of such a refund policy. No Minister would be able to modify databases as all user data is strictly protected by our Privacy Policy: https://www.ee2.eu/help/gdpr/

EE2 Multiplayer is peer-to-peer (except MonaNAT which is only used for routing the traffic when needed). The game is simulated on all players computers, not the Server. Due to that, it's impossible to determine game results automatically. This is also the reason of all the connection problems that we experienced in the past, before MonaNAT.

— Improved the Multiplayer Rating System by adding a new "session ID" variable. Players in the same game get the same session ID which is sent with the game statistics. It will help to prevent duplicate or incorrectly counted points issue.

Before that, some games could be counted multiple times, and host quits detection method was based on game time, which could often differ in received game results log.

The "Gamestats Server reconnect issues" was also fixed in March 2019: viewtopic.php?f=58&t=5202
Thanks to that there is no longer a problem with missing games.

I'm not a fan of any type of "verification". This only is a waste of time for any person who would be checking it. There are known players with bad Internet connections, so there is no point to host a rated games to play with them. It can be understood as counting on "luck", that they'll get disconnected and you will win points no matter what game result is. We can not "cancel" the rating type from a game when an unexpected quit is detected, because that would be abused by players who don't want to lose points. They would be disconnecting WiFi or Ethernet cable from their computers.

The current Leaderboards also has (in my opinion) some bad players on top of it. So the whole drama about the points won't change anything, as there will always be players that will try to be 1st, for example by playing 1v1s with friends.

Back to the discussed game: https://www.ee2.eu/multiplayer/rating/? ... CB46920C2C
As we can see, the host quit was detected 2 times.
Logs has came from players: BilgeKagan, then <<*TOP*>>TheKnight, then uRs..Batu.
The game log from player uRs..Batu was determined by my rating scripts as the final result, because the game time from his log was: ~12min 58sec. All other received results were ~12min 25sec.
This means, that Batu and BilgeKagan were playing 33 seconds longer than others.
For me it seems like the Rating System script is handling host quits pretty good. The only issue is that those players are dropping the connection to the host player, but are still sending data to EE2.eu. So it's like their Internet connection is not going down, just a connection with a single IP/port is dropped and not resumed. They most likely have very bad Internet Service Providers that does those connection drops, but this could be also considered as intentional firewalling of connections, in order to fake the statistics. So one of the solution would be also banning all players who are often sending "junk" data to the Server, as it looks like a hacking attempt. However, we all know that it's not the case. So, with those problematic players we should only play unrated games.
Best regards,
Dr.MonaLisa
Ministry of Game Affairs
Department of Control and Complains
Top
Post Reply
4 posts • Page 1 of 1