Dr. Mona Lisa has investigated a problem where the game might freeze for over 40 seconds after restoring the window (for example using ALT+TAB). The problem seems to be caused by Nvidia drivers on Windows 10 and Windows 11. To fix it, please check option: "Disable fullscreen optimizations" in the Maximization Helper window. This option will be checked by default in the next version of Unofficial Patch 1.5.

In order to disable full screen optimizations, please follow the guide below.
1. Start Unofficial Patch 1.5 Launcher.
2. Click on "Change UP1.5 Settings" button on the right.
3. Make sure that option "Always show the Maximization Helper" is checked, then click "OK - Save Changes".
4. Start the game and minimize it.
5. You should see the Maximization Helper window in the top-left part of the screen.
6. Check option "Disable fullscreen optimizations", and click "Yes" when it asks you to restart game. 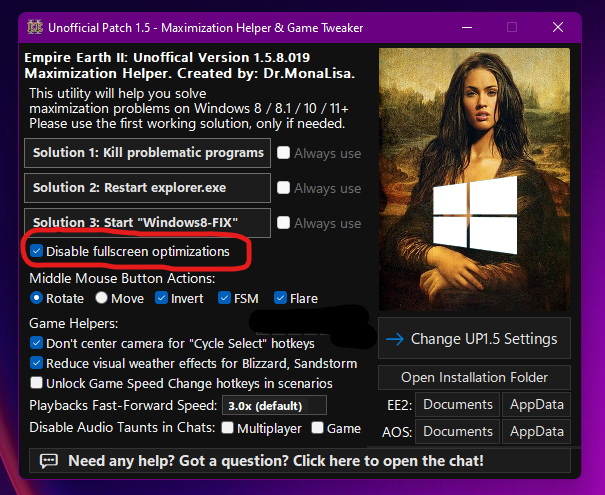 These users thanked the author Dr.MonaLisa for the post:
calsch03

None of antivirus programs seem to detect UP1.5 executables as malicious:

- Option "Disable fullscreen optimizations" is now checked by default for all users after installing this update. It's available in the Maximization Helper window:
* It fixes frequent game freezes after restoring the game window using ALT+TAB. This problem was usually occurring for players who are using NVIDIA graphics card.
- Moved the folder icon from the Launcher resource to an external file in order to fix the recent Windows Defender false-positive detections.

- Disabled access to the "LAN / Direct Connect" menu. Learn about the reasons and how to manually enable it here: https://ee2.eu/multiplayer/help/#landisabled
- When option "Remove 100 FPS limit" is enabled, and the player is currently in the Menu or Multiplayer Lobby, the option will be dynamically disabled in order to reduce the GPU usage, temperature and save electricity!
- Improved detection of the inactive game window. When the windowed mode is used - it improves the taskbar icon flashing function, and prevents playing all audio messages (taunts), from "missed" messages after restoring the game window.
- Fixed an issue where multiplayer users could hear multiple audio messages (taunts), if they received an invite to a game which contained a taunt text in the title. It has been replaced to the "saving slots" audio feedback which is only played 1 time per game session ID.
- Fixed a bug, where on Multiplayer Lobby, it was impossible to decline game invites from Dr.MonaLisa due to the crown symbol in her nickname.
- New feature: Custom audio themes for special occasions, for example Christmas. UP15_GameHelper.dll can now dynamically remap the audio, depending on configuration on EE2.eu. For now, this feature can be disabled by the "DisallowChristmasExpansion=1" custom configuration command. Most likely new sounds will already be activated this year, and updated as the feedback from users come.

HI，Doc!
I have a suggestion. In EE2 and EE2X, the trajectory of missile weapons is horizontal, but ... I think parabola may be better.

Hi yangc. From what I remember the missile movement is hardcoded. It could theoretically be changed to the ones that the bombarda cannons have in epoch 8+, however it's something to mod for yourself. Unofficial Patch doesn't change the core game behaviour in order to keep the original balance and strategy. Even a little tweak in missile movement type could affect the timing, visibility and other aspects that we have no possibility to verify.
Best regards,
Dr.MonaLisa
Ministry of Game Affairs
Department of Control and Complains
Top

- Fixed an issue where UP15_GameHelper.dll could determine a wrong window handle as the main game window, if a window with the same name (e.g. "Empire Earth II" Windows Explorer folder) was open at the game start time. It could prevent the taskbar icon flashing or audio playback (taunts) system to work correctly.
- Improved reliability of the "Exclusive Content Downloader" feature.
- Option "Enable Anti-Aliasing in DirectX 9" is no longer enabled by default (fresh UP1.5 installation only).
- The status of option "AntiAliasing in DirectX 9" will be automatically changed after this update, in order to prevent this option from being enabled on Intel HD GPUs where I detected a huge performance degradation. The auto-status-change will persist until the next manual configuration change in UP1.5 Settings.
- "TranslateTextsSourceFile" improvement: Added the full UP1.5 texts database translation for the Spanish language. Thanks to player "Genrox" (Yoshua).
- Fixed an issue where on some language versions (e.g. Spanish), the frame rate (FPS) information (hotkey CTRL+ALT+F) was not displaying the actual number of FPS, because of too long translation text.
- Fixed an issue where game cheats did not work on the Spanish version of the game, because they were unnecessarily translated by people who worked on it back then in ~2005.
- Experimentally improved the alert siren system. Warehouses will no longer have the Anti-Aircraft RPS and won't take reduced damage from some units (bug present since ver. 1.5.0). The non-military Building RPS have been modified to allow attacking aircraft units (it should not matter as hopefully all economic buildings have the attack ability disabled). There is a risk that this fix will cause some other problems in the game, that's why we will be observing how it works and in the worst case revert it in the next update.
* This change does not fix a bug where Warehouses are treated as "Immobile Defense" buildings and are affected by the Custom Game Pace settings.
* WARNING: This update will make previously recorded game playbacks incompatible. They will hang / stop due to incorrect synchronization. Game saves should not be affected.

On this same note, how do you change the TerrPopCap values? They aren't initialized in the header file.
Top