How to create Scenarios for EE2 & EE2X - Handbook from Loew

How to create Scenarios for EE2 & EE2X - Handbook from Loew

Please do not reply to the thread here! Disscussion and feedback have a place here:
viewtopic.php?f=54&t=5592

To jump to a specific location, simply search for one of these terms in your browser by pressing Ctrl + F.

The scenario editor of Empire Earth 2 offers many possibilities to create your own campaigns and scenarios. Unfortunately, Mad Doc Software did not produce a manual for the tool at the time to explain its functions. Over the years, however, I have been able to learn a lot about creating scenarios and maps with the Empire Earth 2 Editor by working on the unofficial patch 1.5. I will incorporate this knowledge into this manual and supplement it with tips and hints. So this manual will be an interesting reading for beginners as well as for experienced users of the scenario editor of Empire Earth 2. I hope you will enjoy reading it.

I would like to take this opportunity to thank Doctor MonaLisa, without whose help we would probably not have come this far and who supported me in exploring and investigating the functions of the editor.

The individual functions of the editor

First thoughts
How maps are created for the skirmish as well as for the multiplayer should already be known. Here is the link again:

Basically I assume you have thought about what the map looks like, what history background it has, what victory and defeat conditions there might be and what nation you play, how many territories there are and so on and so forth. That is the first step. Just let yourself be inspired. Patch 1.5 has already added some new campaigns and scenarios that show what you can represent. You can already write down in a text document what the player should experience and roughly draw on a piece of paper what the map could look like. There are no limits to your imagination, especially with the enormous scope that Empire Earth 2 has as a game. Now comes the next step. With the help of the editor, you define groups, areas and film lines. 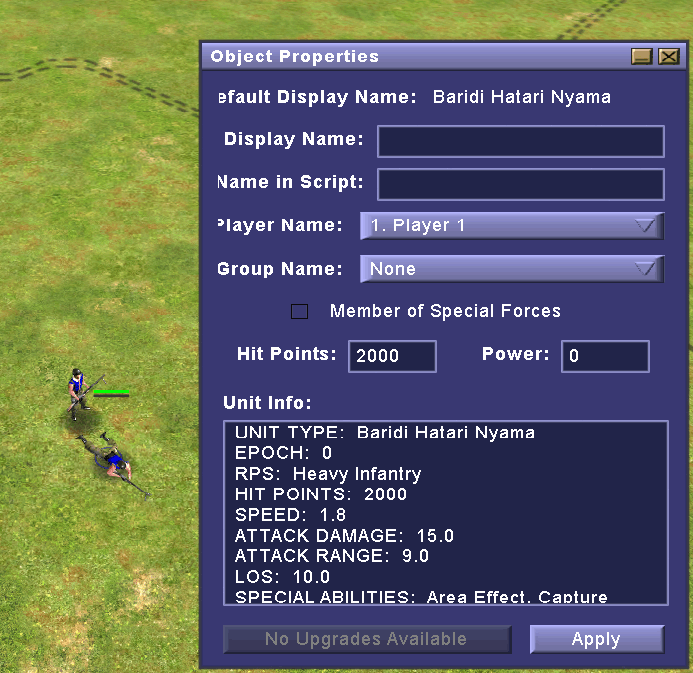 With a double click, you can call up the properties of a unit in the editor. Among other things, you can assign a name to call up in the script and change the display name. 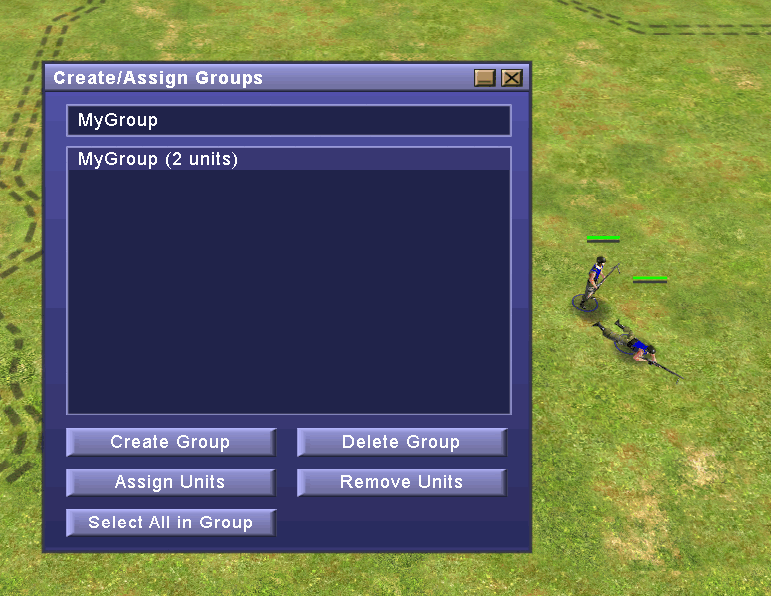 A group is any number of objects. You can add different units to a group and later interact with them via the script. Under → Edit →Creat/Assign Groups... you can call up the tool to create a group. 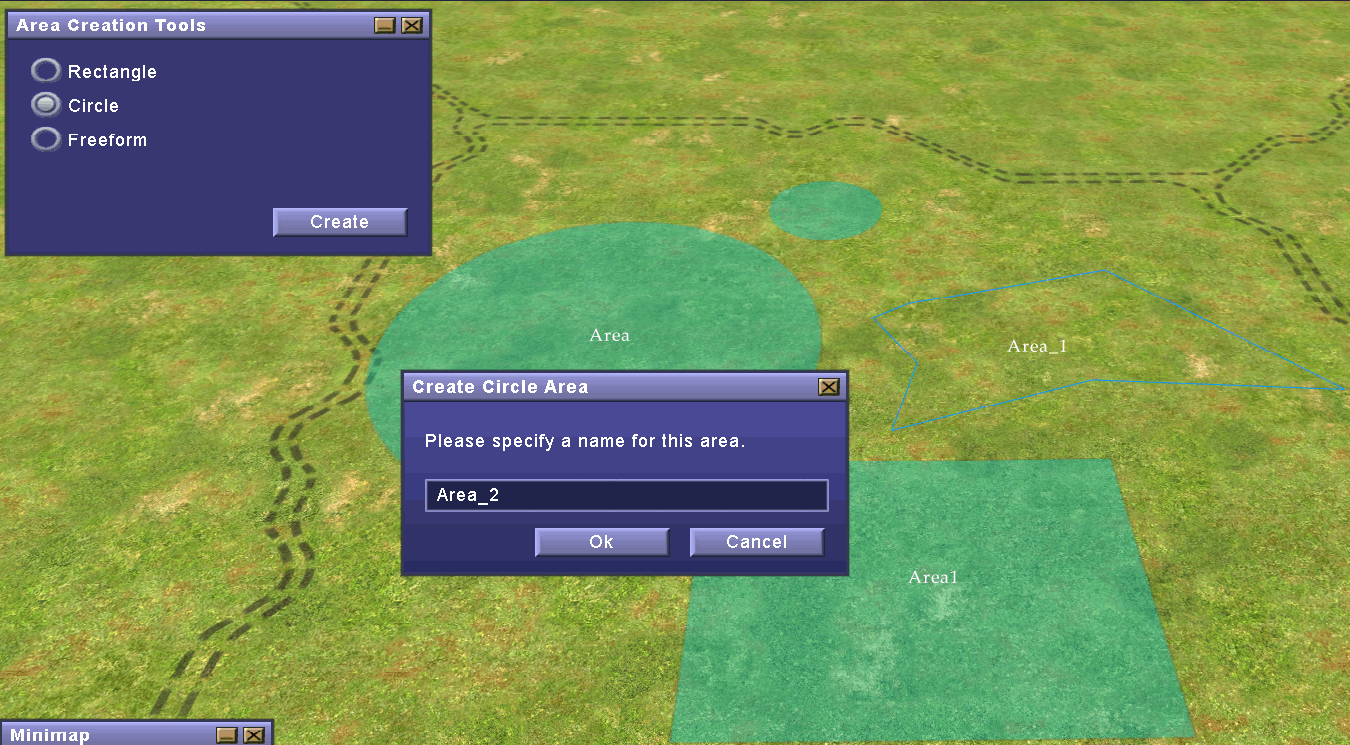 Certain areas on a map are defined on the map in order to be able to use them later in the script. For example, if a unit is to be created in an area for an invasion or a building is to be built in a certain area. Under → Tools → Area Placement you can call up the tool and choose between circles, rectangles or free forms when creating. 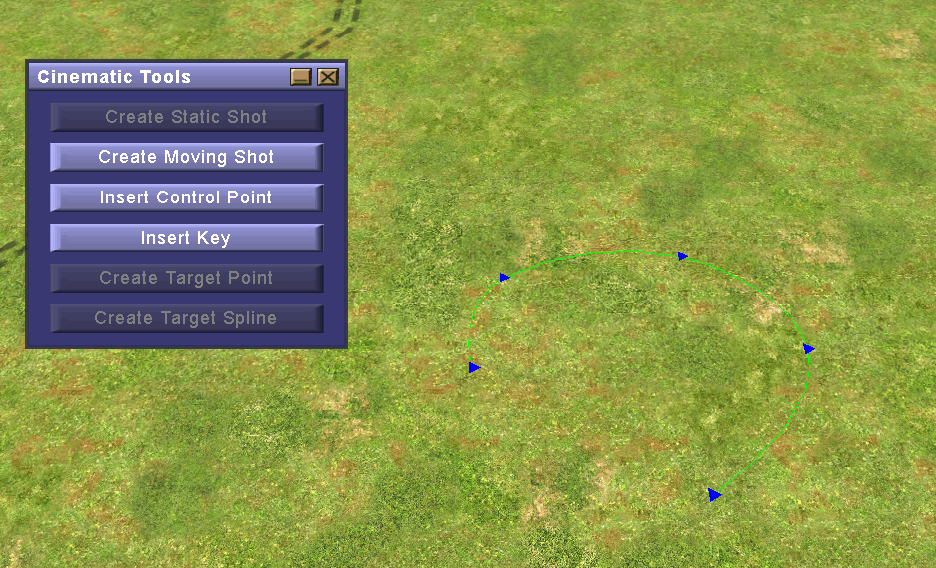 Camera movements through the scenario offer the possibility to advance the story. In the game, they are used to show the player the effects of his victory or defeat. A tracking shot around the corpse of his slain leader makes the defeat even more dramatic. Or a tracking shot through the expanded base in the event of a victory makes the victory even more beautiful.

The tool for this is called up under → Tools → Cinematic Splines. The menu offers three options. The rest did not make it into the game.

Here you can create a camera movement with a few clicks. By setting the individual control points, you can determine the later course of the camera movement.

If desired, you can insert an additional control point into the camera movement.

Double-click on the camera movement to call up this menu. It is divided into 3 sections called Control Point, Keys and Transitions. 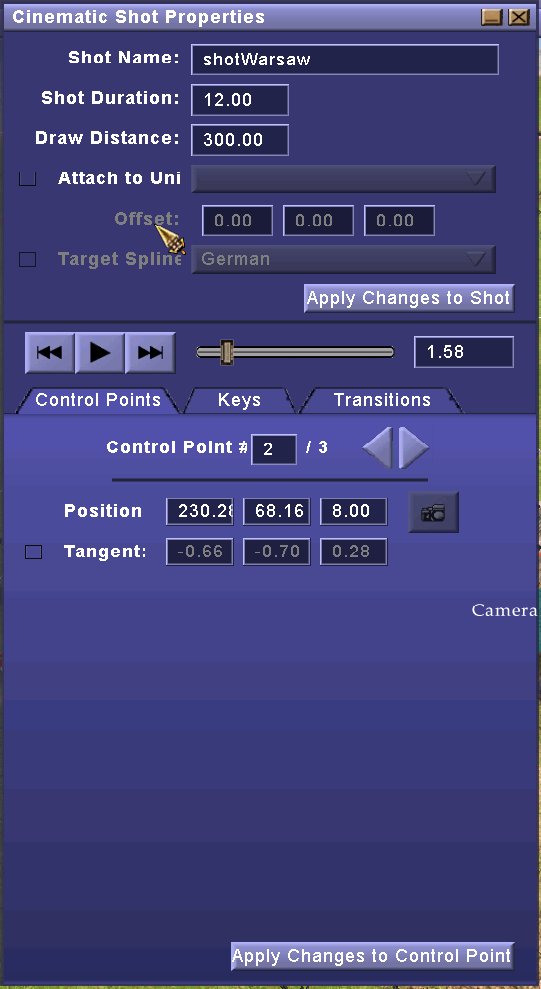 By "Attach to Unit", you can set whether the camera movement should follow a unit. This can be done, for example, to point the camera at the fallen leader, as mentioned earlier.


You can set the position of the camera over time using these control points in 3-dimensions (in the x, y and z axis). That is the width, length and height on the map. A height of around 15 will generally put the camera above all available buildings provided for in the game. Just so you know how high is high. You can also how the the spline curves around the control points by adjusting the tangent settings.

The X and Y axes are already set or are set by moving the camera line on the map. The Z-axis, i.e. the height of the camera movement, must be set manually.


With the keys you can set the how the camera behaves as it travels along the spline. You can change the camera direction, and a focal point amongst others features using the keys. You can also control the start and end transition effects for each of these spline sequences, so that you can have such effects like fading to black etc. 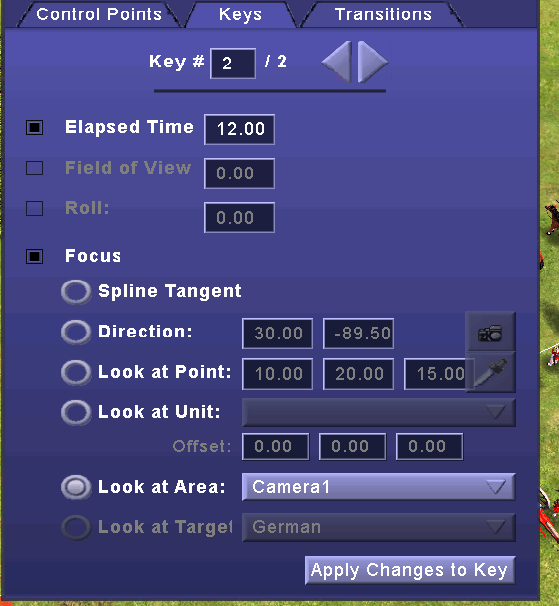 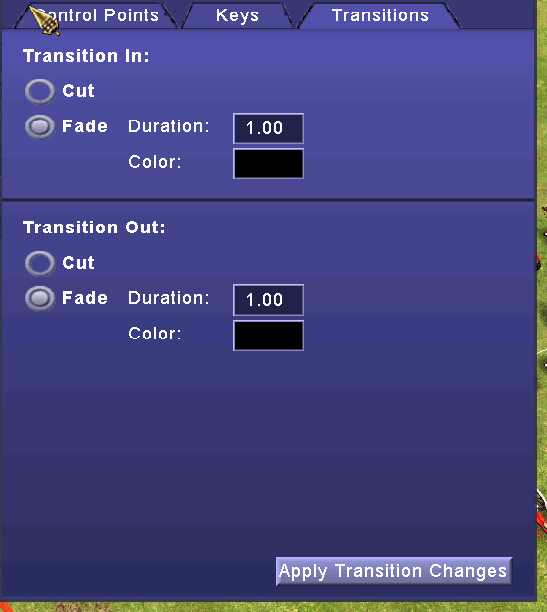 
Individual camera movements can then be joined together. The menu for this can be found under → Edit → Cinematics... 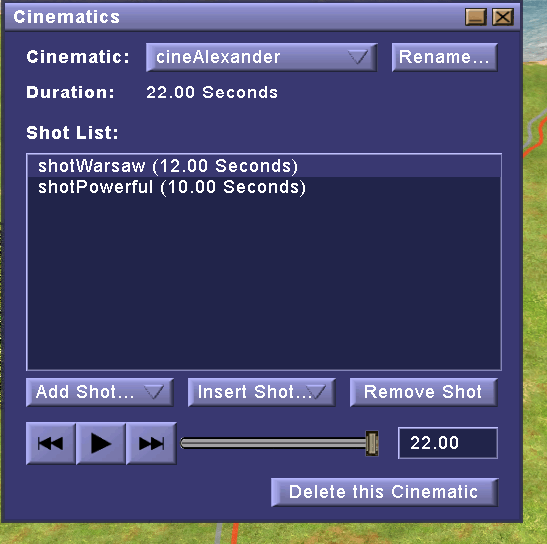 Re: How to create Scenarios for EE2 & EE2X - Handbook from Loew


The diplomatic starting position of the players among each other can be set under → Edit → Diplomacy...
Later, you can change this again in the script.
List of tutorials, useful threads and utilities (look here before posting): Here