When I posted my game against player Wassertonne, the game and the pictures indicate that I achieved Age 11 while player Wassertonne was at Age 6. The pictures does show it ! When I wanted to re-download and re-play this game, both players got only to Age 6. Perhaps I don't understand something. Could someone help me?

Here is the final picture from the original game -- one clearly can see towers in Age 11 !!! Now if you scroll down, you will see the final shot of the game after it was re-downloaded and re-played (just scroll down plz). How can it be explained?!! Any help is much appreciated... 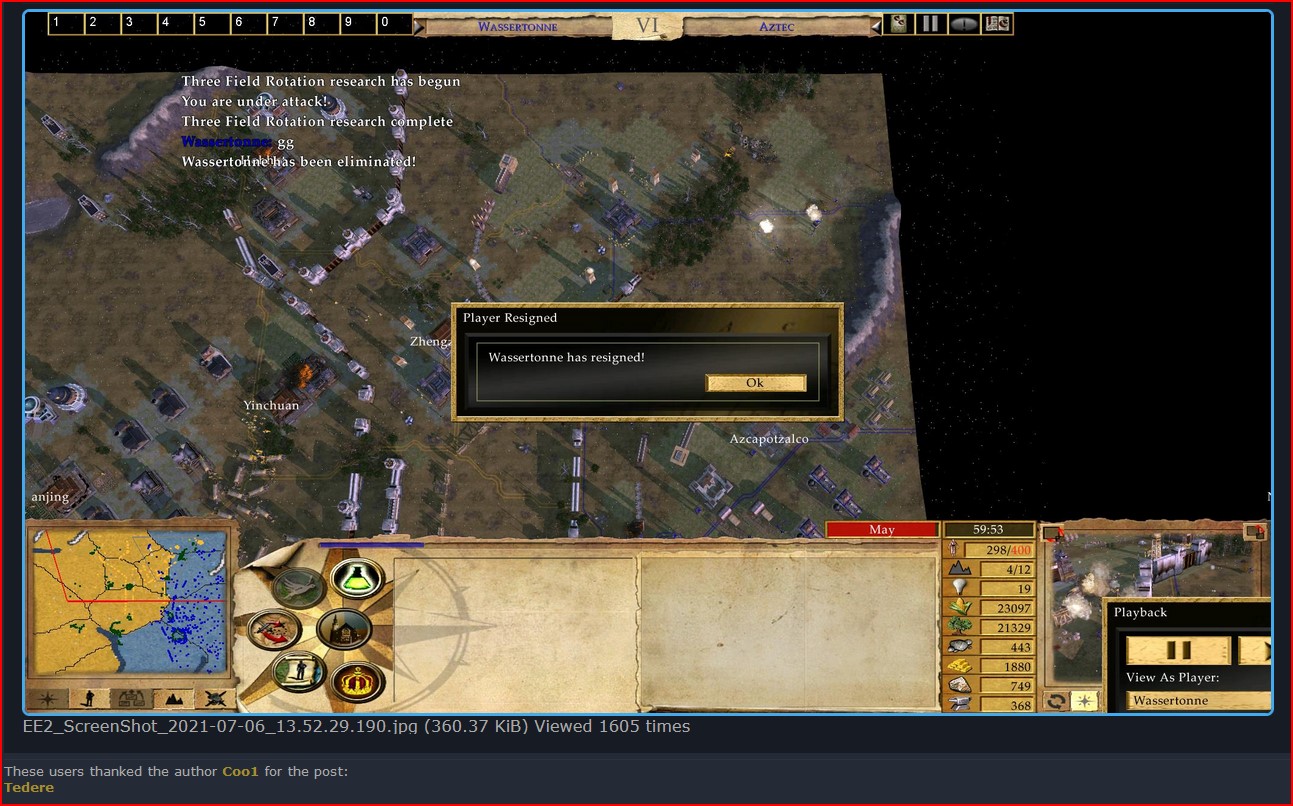 something doesn't add up...

Edit: I downloaded two more pictures clearly with Coo1 at Age 9 and Age 10. How the hell downloaded game could end for both players at Age 6 ?
I thought only I was a sore loser.... 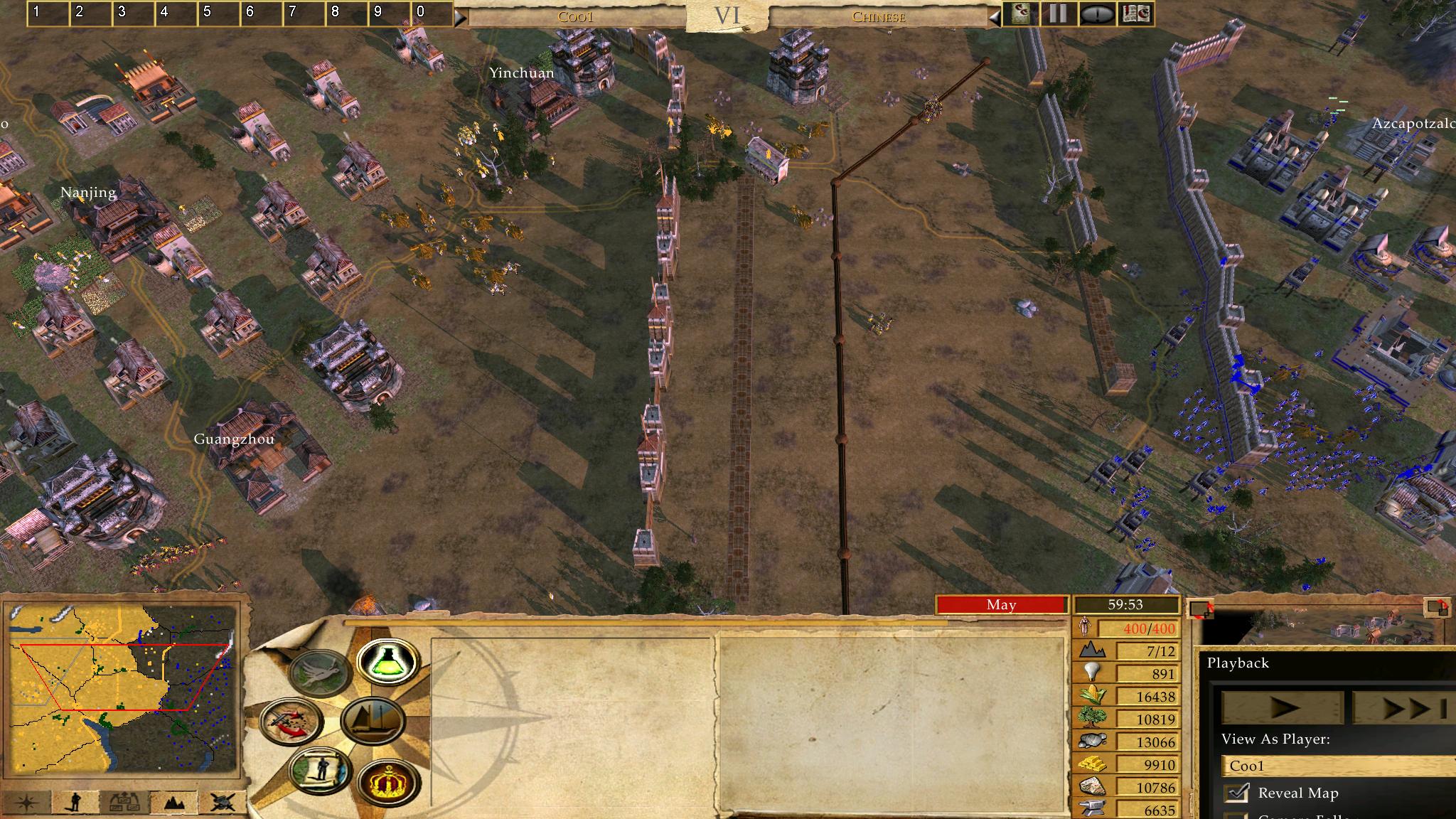 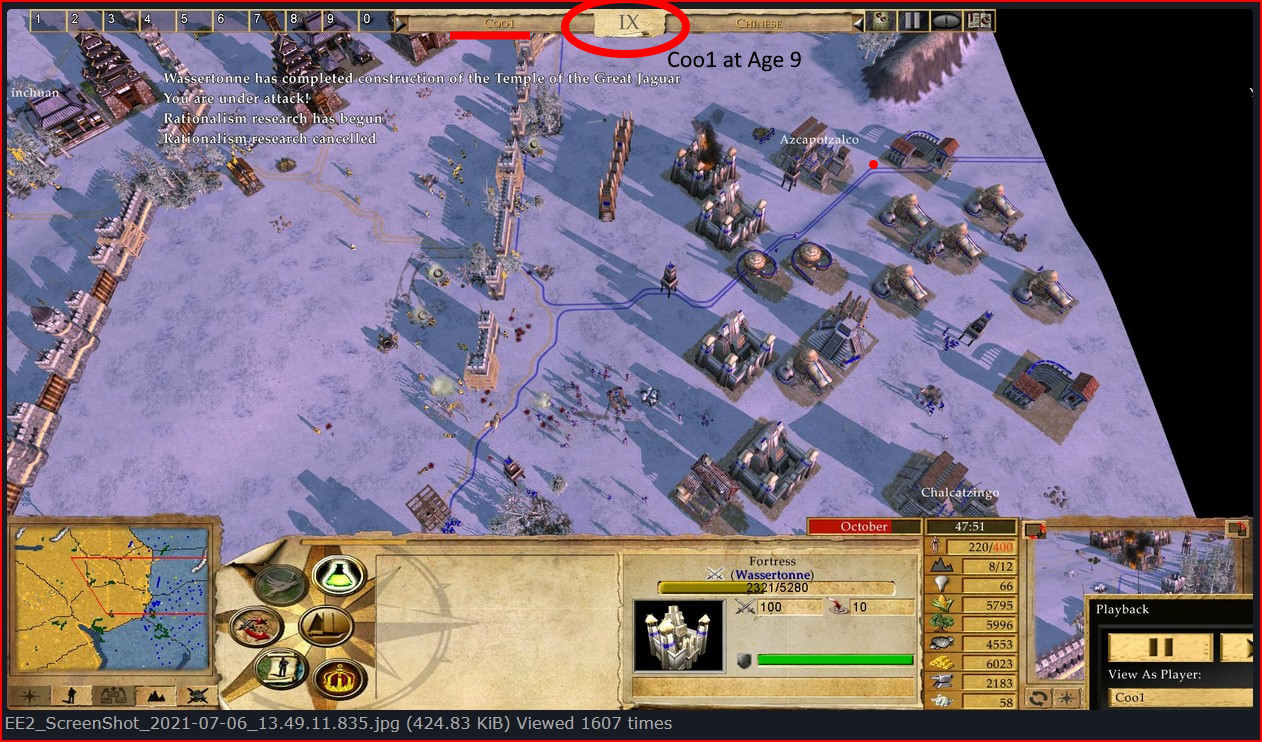 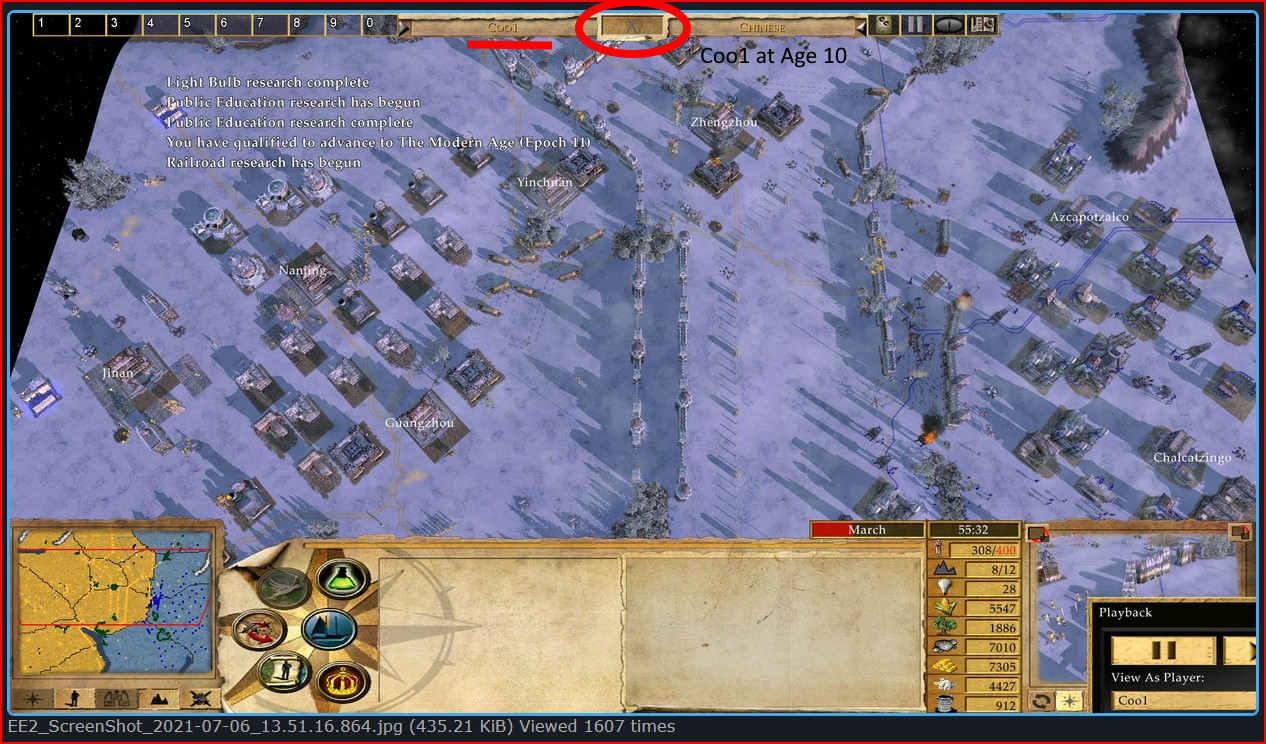 There's a message displayed while watching the playback: 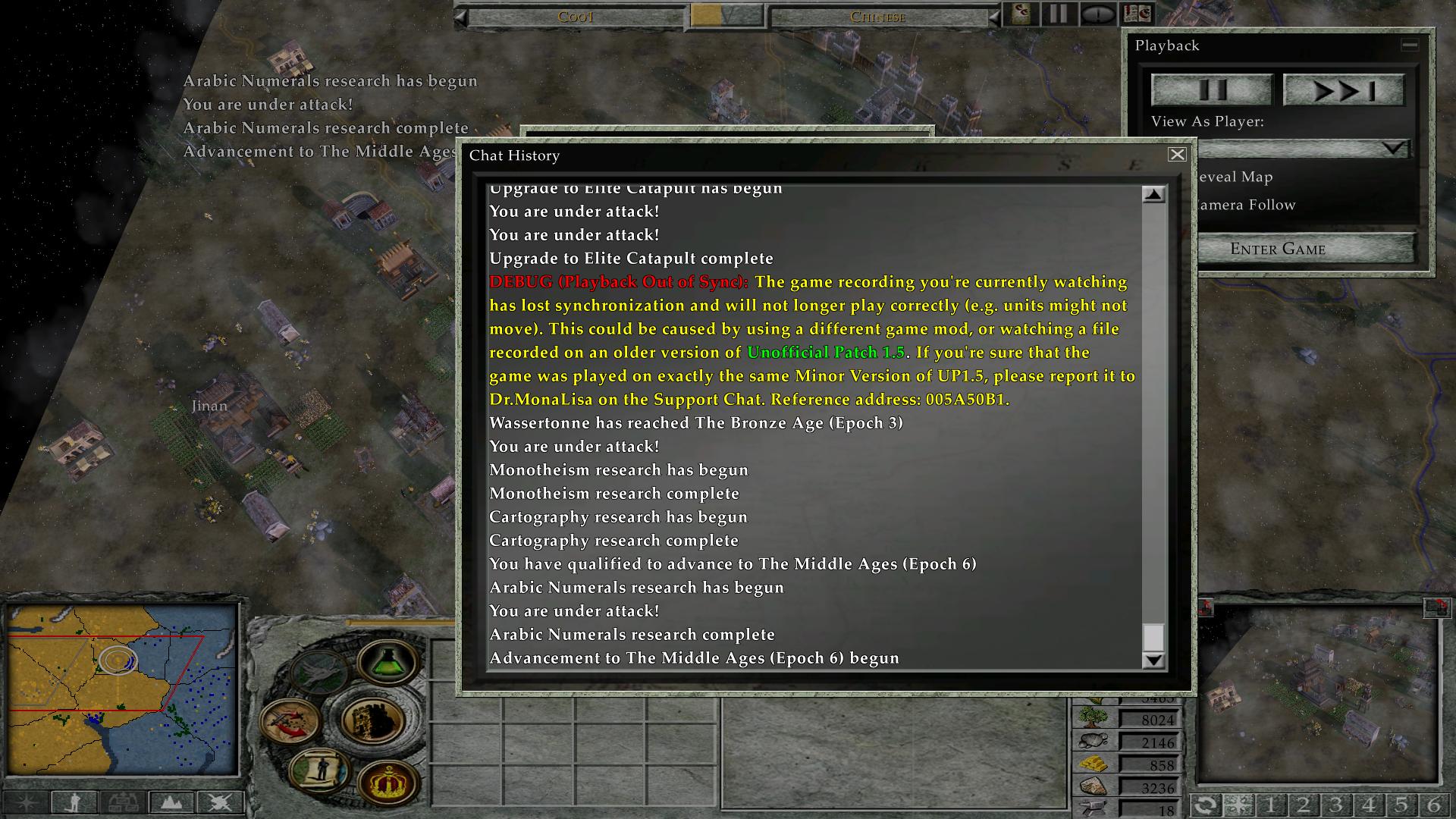 Do you have the original playback file on your disk (before uploading)? Does it play correctly?
Best regards,
Dr.MonaLisa
Ministry of Game Affairs
Department of Control and Complains
Top

The time has gone.
Top

What do you mean?
Best regards,
Dr.MonaLisa
Ministry of Game Affairs
Department of Control and Complains
Top

Not sure how important it is, but the original game shows territories all painted (yellow and blue) while the so "re-downloaded" game picture shows Wassrtonne's lands not being painted blue. In my paranoid mind this means something... I have other circumstantial observations pointing to unexplainable to me things... (But again am I suspicious? Be aware that I am partly paranoid, partly schizophrenic, partly omni-phobic and partly a proud owner of of a bipolar disorder!)

For anyone who was able to download and kept this game before the conjuring had happened -- would you try to view it and make sure that player Coo1 got to Age 11?
Perhaps this game sits in your --> "C:\Users\YOUR_USER_NAME_HERE\Documents\Empire Earth II\playback" folder? The game name should be (2021_07_06)_(12_47)Coo1(China)_Wassertonne(Aztec) (2021_07_06 18_14_16 UTC).e2s without UTC tag. Uploading this game would here would be nice!
Anyone with a valid explanation?
Top

I'm not sure what you're talking about now.

The playback file is damaged (out of sync), and Unofficial Patch 1.5 has correctly detected the issue and displayed a message about it using the in-game chat. I've shown a screenshot with it in my previous post.

— Added an in-game debug message when the watched Game Recording / Playback goes Out of Sync: "The game recording you're currently watching has lost synchronization and will not longer play correctly (e.g. units might not move). This could be caused by using a different game mod, or watching a file recorded on an older version of Unofficial Patch 1.5". Reference address: 005A50B1 (EE2), 005CE121 (AOS).

So any things that happen after this message is shown may not "display" correctly. There's no point in creating "deep analyses" or having "theories", when the game clearly displays that an error has occurred.

Since the game was played on the current Minor Version, it's most likely that the playback file got corrupted while uploading to the forum. If you do not have the original file (non-overwritten by re-downloading), then we can't verify it and should just move on and observe if similar issues don't occur in the future.

ARE YOU FUCKING SERIOUS???


— Experimentally improved the alert siren system. Warehouses will no longer have the Anti-Aircraft RPS and won't take reduced damage from some units (bug present since ver. 1.5.0). The non-military Building RPS have been modified to allow attacking aircraft units (it should not matter as hopefully all economic buildings have the attack ability disabled). There is a risk that this fix will cause some other problems in the game, that's why we will be observing how it works and in the worst case revert it in the next update.
* This change does not fix a bug where Warehouses are treated as "Immobile Defense" buildings and are affected by the Custom Game Pace settings.
* WARNING: This update will make previously recorded game playbacks incompatible. They will hang / stop due to incorrect synchronization. Game saves should not be affected.

— Fixed a bug (present since ver 1.0), where projectiles (usually guided missiles and bombs) were exploding way too high above ships. Reference addresses: 007F7B1C (EE2), 0088E8CC (AOS):
* It was happening, because the game uses the unit size X (width) as their top impact border. It was not that noticeable for the smaller, rounded ground units as much as for the big, elliptical ships.
* The fix detects if the target unit "moveType" is "kUnitMoveType_NavalShallow" or "kUnitMoveType_NavalDeep" and simulates the same behaviour as when attacking buildings. Following with the guided missiles is not negatively affected (works in the unchanged form).
* It also improves explosion visuals in lower epochs, during sea battles. Projectiles (including torpedoes) now explode right next to the hull instead of somewhere far beside. Discussion and before/after screenshots are available in this forum topic: https://ee2.eu/p26690
* WARNING: This update will make previously recorded game playbacks with naval units used - incompatible. They will hang / stop due to incorrect synchronization. Game saves should not be affected.

I swear to God I will ignore all your further "issues reports".

I wasted 1 hour digging in server backup files, thinking there is some hardware error on server's NVMe disk.

I'm myself on the anxiety pills, and all you've done is causing an extra stress for me, because I was already thinking that the disk is dying and requires a fast migration.

I am as well very nostalgic about my collection of old playback recordings.
So it makes me kinda sad that they have become lost pieces of EE2 history.
Is it possible to offer an older patch version to enable nostalgic players to patch
backwards for a while in order to watch properly working ancient playback recordings?

These users thanked the author Gnoo for the post:
IndieRock00

I have all 1.5 installers from the past. Some of the previous updates are still on the server. When I get new Internet (possibly next months) I might create some torrent with all installers.

However, I find it pointless. It's better to live with present or the future than waste time on old recordings. It's also much better to record gameplay videos instead of rely on the .e2s files.

From what I remember the playbacks-breaking changes are very rare. The previous playbacks worked non-stop for like 5 years, so it's not something common to worry about.
Best regards,
Dr.MonaLisa
Ministry of Game Affairs
Department of Control and Complains
Top
Post Reply
8 posts • Page 1 of 1