The Ministry of Game Affairs has a pleasure to present a new Fair/Random Teams Generator, created by the Department of Control.
The Generator is available at: https://www.ee2.eu/multiplayer/teams/

All details about the Generator (and how it works) are present at the website from the link above.

The Fair Teams Generator has been improved.

First of all, an issue with gathering the best player's account rating has been fixed. In rare cases it could reset the best obtained player's rating during the "loop", causing the score results to be incorrect.

The calculation formula has been changed. Generally values like: days since registration, number of games played, number of hours spent in game are now divided by 10. This makes these values less, but still important.

We also reverted the calculation of all rating types to the formula, this is: Skirmish rating, Tournament rating, Unrated rating, instead of the "Globalis" rating which contained all type of played games.

Another significant change is the way that Fair Teams Generator gathers player accounts. When somebody changed the computer, and then used a new account instead of logging back to the old one - the Fair Teams Generator was treating them as a new player. This was causing the score to be much lower than expected, resulting in teams not being fairly generated. To fix it, we now use the "known As" database value, which is manually set by the Administrator. This value allows me to manually connect previous player's computers / accounts with the new profile(s). As example, player "wilparra" now has the number of games played, and the time spent in game since his "fercho101023" account. Same with "KayOne" who changed the computer recently. Accounts from his 3 computers since 2015 are now counted in the final score.

As a result, in my opinion the score is very reliable now: 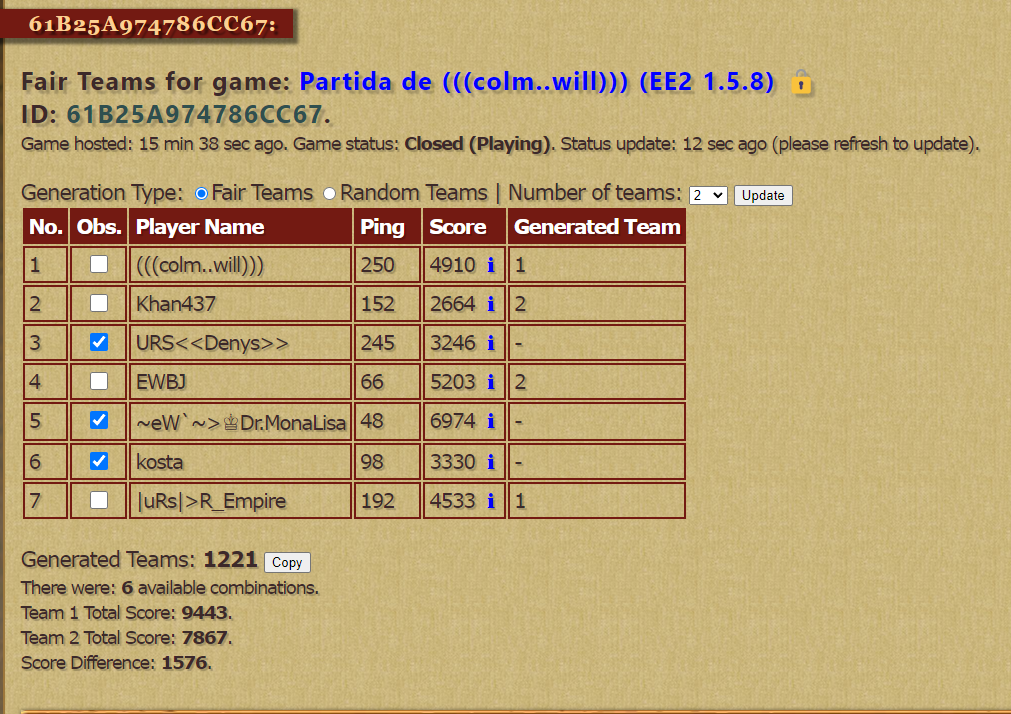 There is also an

icon added in the player's score column. When you hover the mouse over this icon, it shows what points exactly were used in the final score:


(please note that Dr.MonaLisa's unrated rating is lower than expected, due to quitting many, many games during internal tests when testing the Multiplayer Lobby features. So this account is sacrificed for the greater good).


Recently, the new Multiplayer Lobby commands have also been added:

After typing one of these commands in the Lobby chat, the SERVER will automatically execute the Fair / Random Teams Generator and post the results in a message to players who are currently in that game.

I am waiting for the feedback from players regarding this feature