OK, will be back in a few minutes

Just to confirm, it's with the "normal" (better zoom-outs) camera in UP1.5, right? 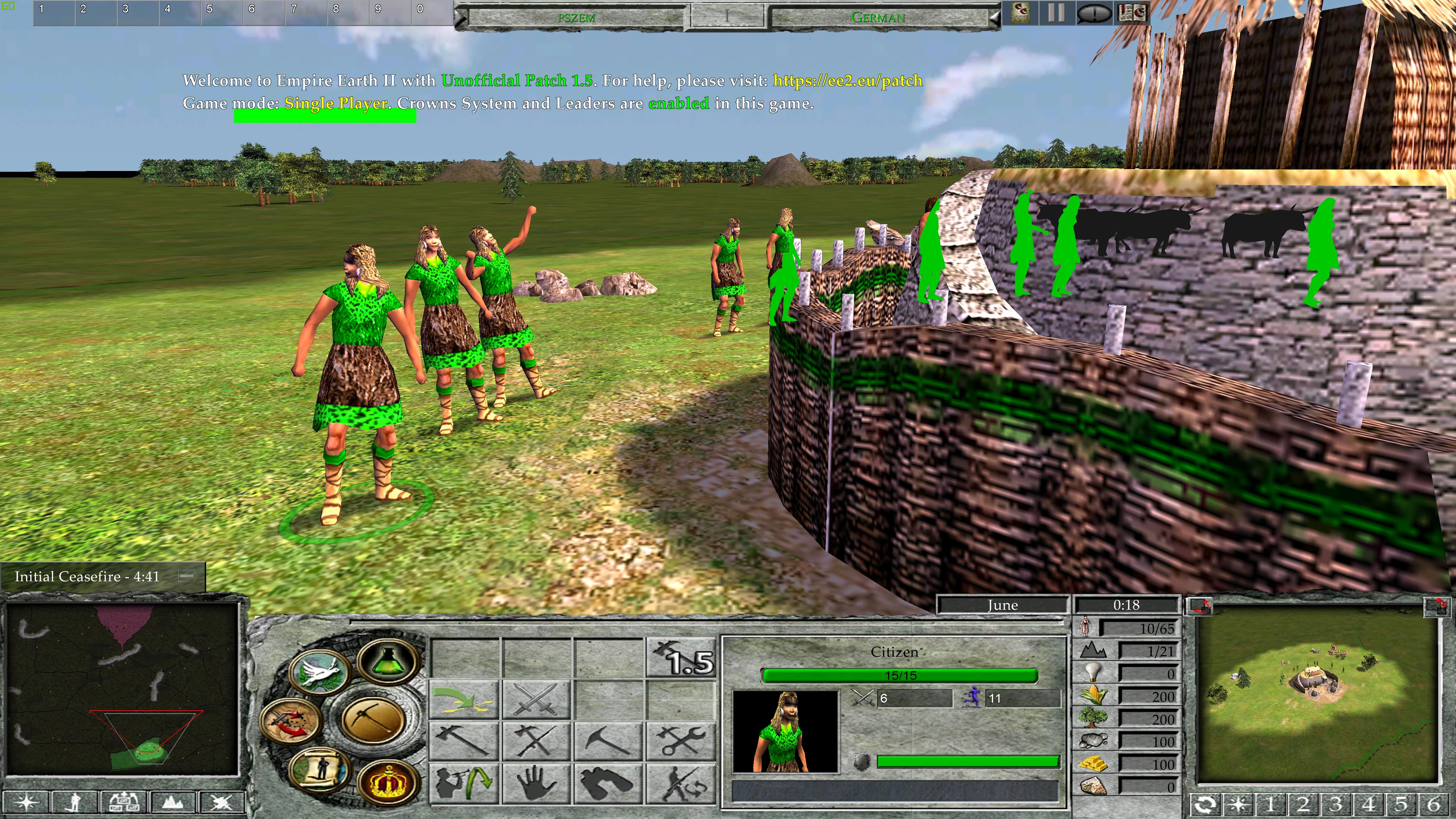 
From what I checked in statistics earlier this year, 95% (or more) EE2 players use widescreen resolutions (16:9, 16:10, etc.). The remaining players will upgrade their monitors over next years anyway. Therefore there is no reason to worry about 4:3 monitors, just as EE2 developers didn't worry and didn't add 16:9 support back then. Theoretically I could generate config files depending on screen resolution aspect ratio, but that's a lot of testing and quite pointless work, as this preview doesn't change anything, and even didn't work for ALL players for like 4 years

Hey yeah it's with the "normal" (better zoom-outs) camera in UP1.5!

Hmm I get your point, just so you know I actually use a 4:3 monitor out of choice, for older games that were made for that kind of aspect ratio.

I will still use the GOG version for the official campaigns, but for modding I will need to choose between the Developers version and the normal 1.5 version, and so far I just wish I could avoid the new camera settings - I am hoping the Loew's Ambient Pack assets in a scenario/campaign can be enjoyed in AoS with normal 1.5 version even with "No" selected in the Unlock UP1.5 units etc. option.
Top

If someone is interested, here are more details about zooms in UP1.5, and how to work-around it: viewtopic.php?p=24809#p24809
Best regards,
Dr.MonaLisa
Ministry of Game Affairs
Department of Control and Complains
Top

Optional Minor update 157009 has been released!
Most important changes:
- Added new hotkeys for players who like to cheat or city-build (available in Singleplayer mode only):
* CTRL + ALT + SHIFT + L = Toggles the Object Placement Tools, like in the Map Editor. You can place any building / unit / world object during the active game.
* CTRL + ALT + SHIFT + (W, 1, 2, 3, 4, 5, 6, 7, 8, 9, 0) = Switch the active player to player World or Slots 1-10.
- Added a new option to UP1.5 Settings: "I suffer epileptic seizures (neurological disorder)":
* Disables some of game effects to minimize the risk of epileptic seizures for players who suffer this disorder (currently removes the Camera Shaking effect for nuclear and other explosions).
* The Anti-epileptic seizures requires option "Enable DirectX 9" to also be checked.
- "Automatic Font Size for Screen Resolutions" improvements:
* Fixed fonts generation for Chinese language (it originally uses different fonts than all other regions).
- Added the EE2 "Bonus Maps" (Yucatan, Wasteland, Honeycombs, Spokes, Three Crowns, Ink Blot, Jungle Kings, Thunda Down Unda, Triumvirate Tussle, Golden Triad, Indonesia, Doughnut, Battle for the Nile) to be also available on the expansion pack - EE2: The Art of Supremacy.

Optional Minor update 157010 has been released!
Most important changes:
- Fixed a problem where players who installed EE2: The Art of Supremacy (expansion pack) from a Russian distribution could not be able to join other players on Multiplayer due to "Host has an incompatible installation: Models differ." error. It's because file "EE2X_graphics.zip" contained modified EE2X logos with Russian texts. The "EE2X_graphics.zip" file used in all other distributions has now been included to UP1.5 installer to fix this compatibility problem.
- Launcher Support Chat messages sending improvements to prevent displaying of the sent message in gray color, if another thread already received this message and updated the window.

Optional Minor update 157012 has been released!
Most important changes:
- Integrated UP1.5 Settings with the new "EE2, EE2X - Language Changer, created by Dr.MonaLisa". More information: https://www.ee2.eu/download/languagechanger/
* The Launguage Changer allows you to change game language for 3 separate components: Text, Audio, Video. A working Internet connection is required to use the Language Changer.

Optional Minor update 157013 has been released!
Most important changes:
- Improved UP1.5 Settings window:
* Option "Force this screen resolution" now displays screen resolution groups in a combo box.
* Repositioned some options and enlarged spacing.
- Removed 3 incorrect EE2 maps. They were from EE3, couldn't be loaded in EE2 and most likely were accidentally added to UP1.5.
- Changed the style of the "Donation" button (hopefully it will be clicked from time to time).

Optional Minor update 157014 has been released!
Most important changes:
- New feature: AntiAliasing in DirectX 9 (DX8 to DX9 converter):
* It's disabled by default, but can be enabled by UP1.5 Settings.
* It's possible to select the maximum anti-aliasing multiplier (from 2x to 16x), however the maximum on all configurations I tested was 8x (and this most likely will be used if you select 8x or greater).
* It significantly increases the image quality (textures smoothness) in Empire Earth 2 and Empire Earth II: The Art of Supremacy, however requires more GPU power. It's recommended to use this option only on computers with a good graphics card.
* Definition: Anti-aliasing uses various techniques to get rid of jagged edges on your screen which appear as a result of square pixels forming non-rectangular shapes. A higher numerical multiplier such as "8x" or "16x" produces a more effective anti-aliasing effect while requiring more processing resources.
* Special thanks to elishacloud for improving d3d8to9 to support AntiAliasing.
* Details and the performance impact can be seen at: https://www.ee2.eu/blog/015-antialiasin ... rectx9.php

If you have got UP1.5.5+, you can update by clicking: empireearth2://FunctionMinorVersionInstall
Best regards,
Dr.MonaLisa
Ministry of Game Affairs
Department of Control and Complains
Top
Post Reply
336 posts