New EE2 Government (since: 01.03.2014), everything about the EE2 management. You can report other players here.
Locked
41 posts

Hello, I am reporting the player Coo1 due to unsportsmanlike behaviour and insulting me with "sore loser", "solong loser" for no reason.

I did not have problems with player Coo1 so far. Usually he invites me to his game but as I am commonly online same time as my clan mates and other friends on EE2, I don't join his 1v1 game (with no observers allowed) those times.
1. It would be inapropriate to my friends.
2. He hosts settings that are not prefered one to me.

However I did join his room and played with him many times.

Yesterday was perfect day for relaxed EE2 playing with clan and firends after hard week on uni. After a long game vs. R.Empire I went in a room where we planned 2v2.
Suddenly Coo1 started to send me really offensive messages, provoking for no reason and insulting. Maybe the reason was lack of players in his room or a cheap whiskey. I don't know.

I never had problems with different game settings. I play fast pace, med pace even slow did few times, different range of epochs from 1-1, 1-15, r-r to all same-same epochs and even Coo1 settings with no citizens in start. No problems. But I like one more than I do others but still play all and never insulted someone just because he likes different type of games or because he don't want to join my room.

Anyway, with Coo1 is different as he only plays his settings and complain on anyone that has different setting then he has. Espacially he has problems with fast pace which shows pure skills of multytasking and competitive setting 5-5 where victory doesn't depend on lack of ressources on map or bad civi.

So this is what I got: 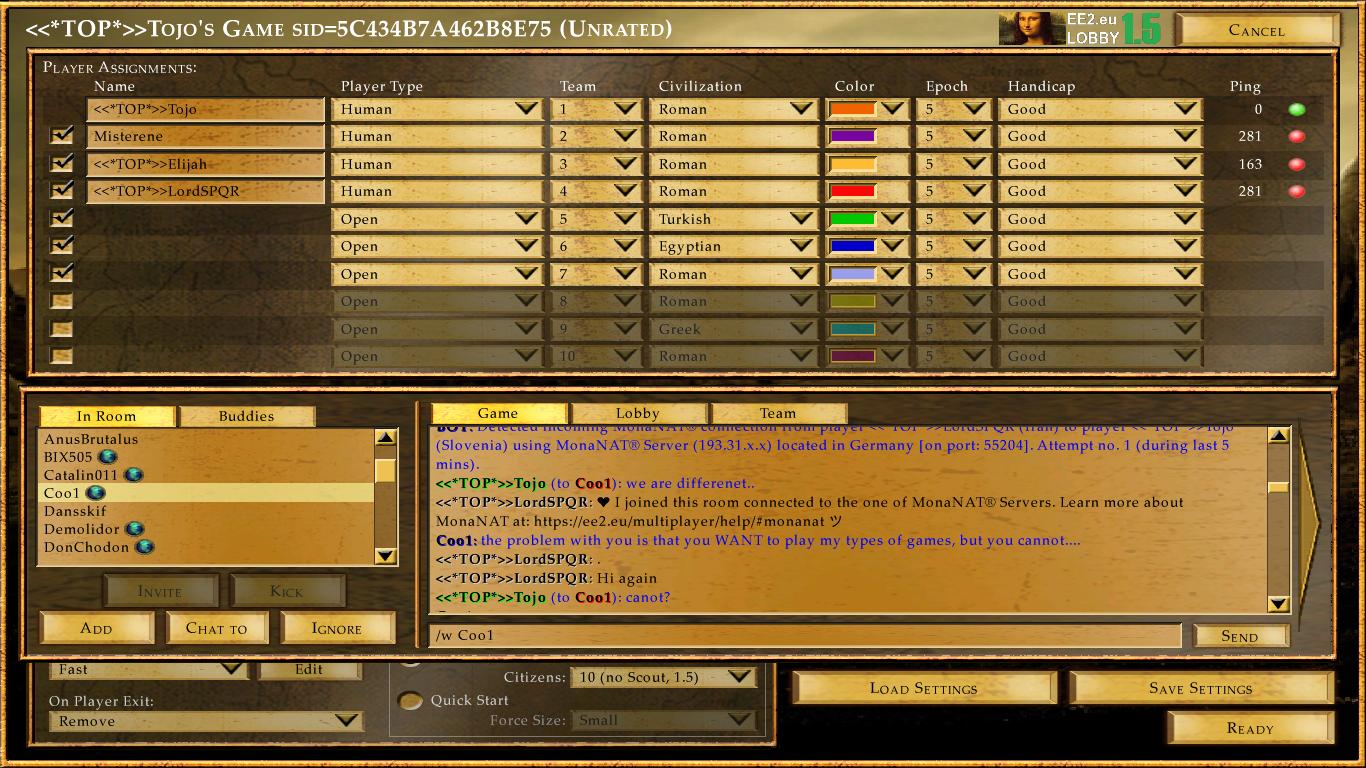 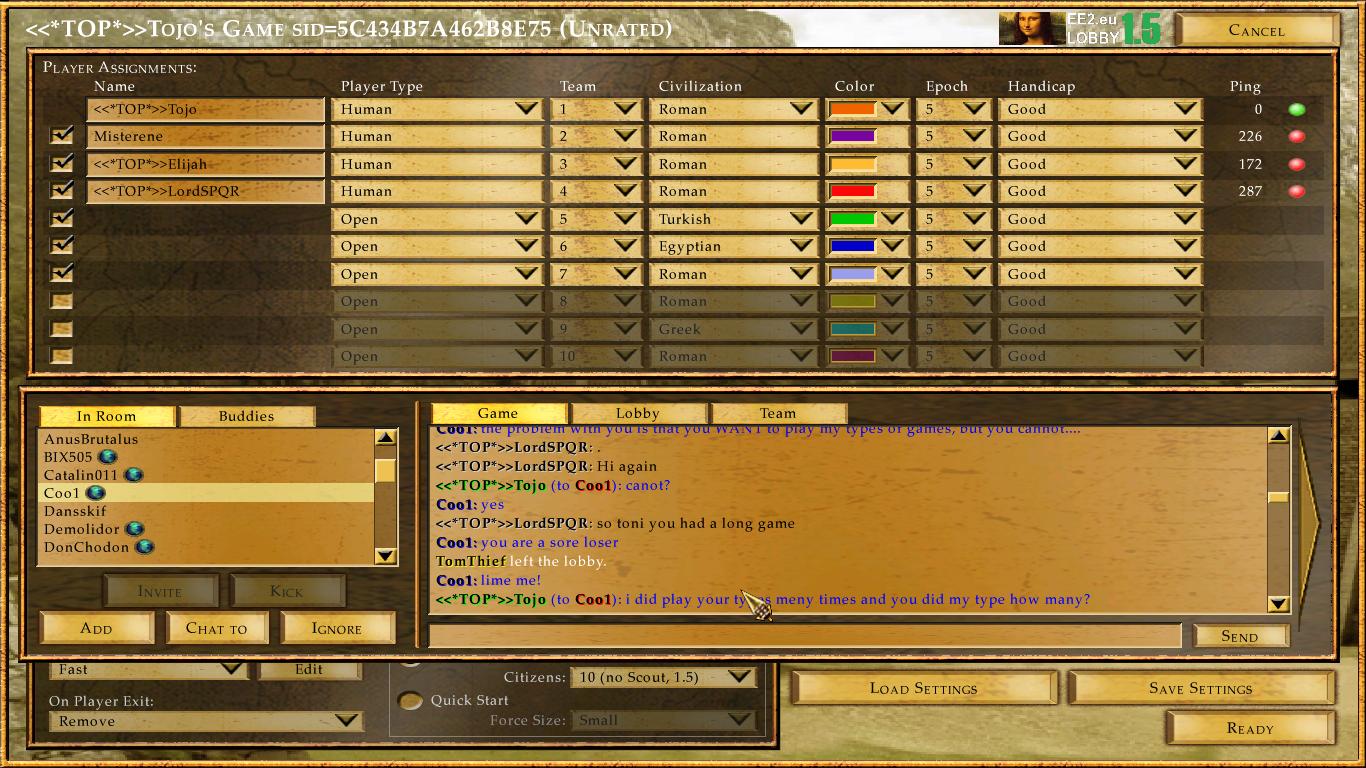 
Then he started that why I only post games that I won and don't post the ones that I lost. Lets clear this: I don't often post games, I did only 1 playback, it was vs. Kay which was posted not because of win but because its thrilling. unusual. About game recordings. I have 3 games on Youtube 2 were posted to show clan members how i play, 3v3 was posted because I rarely record games and it is the only game I had where <<*TOP*>> members are in 1 team. So it's appropriate to post it.

I also posted 2 games that I lost in Clan's private section, so I don't have intention so show off infront of nobody.
So he sent me link of the game vs. him and told me to enjoy. ( Like: Proud man enjoy your lose) 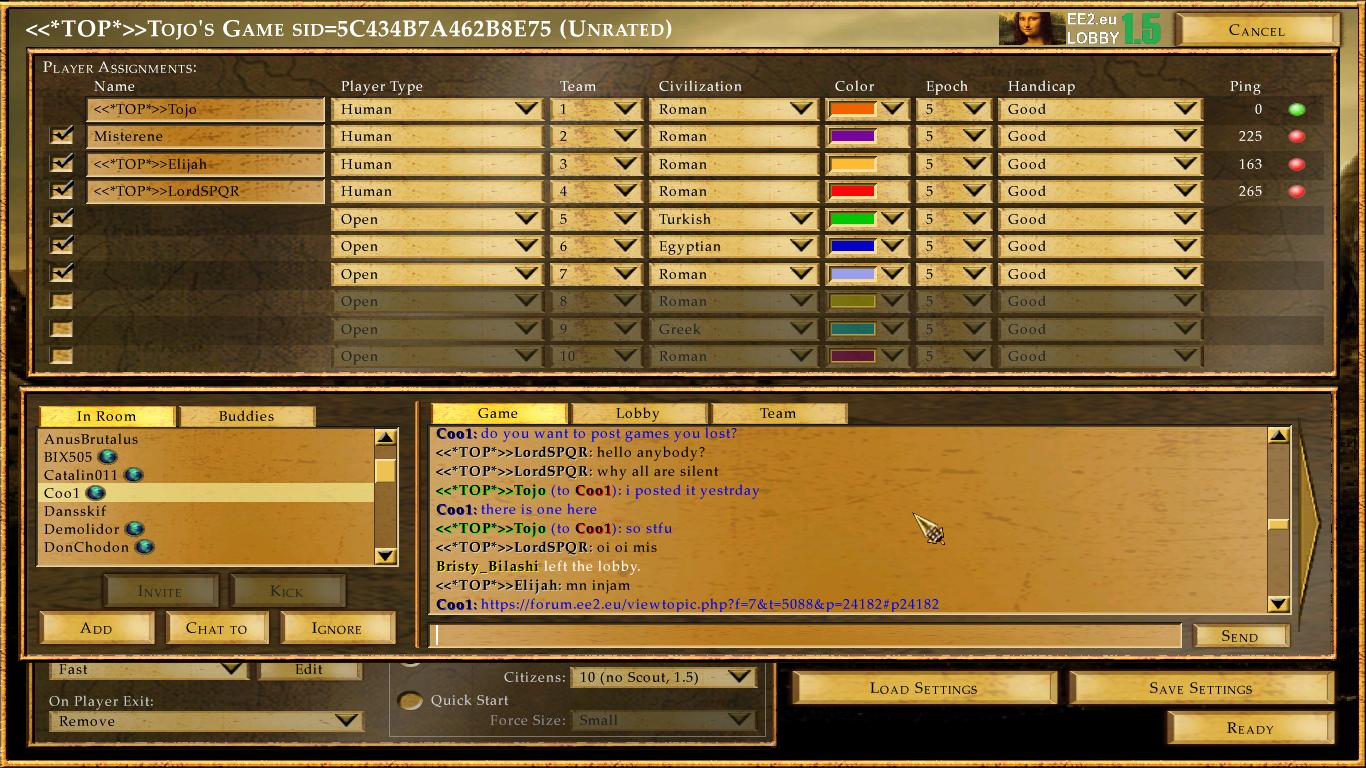 After that i told him that i remember the game. and he continoued insulting: 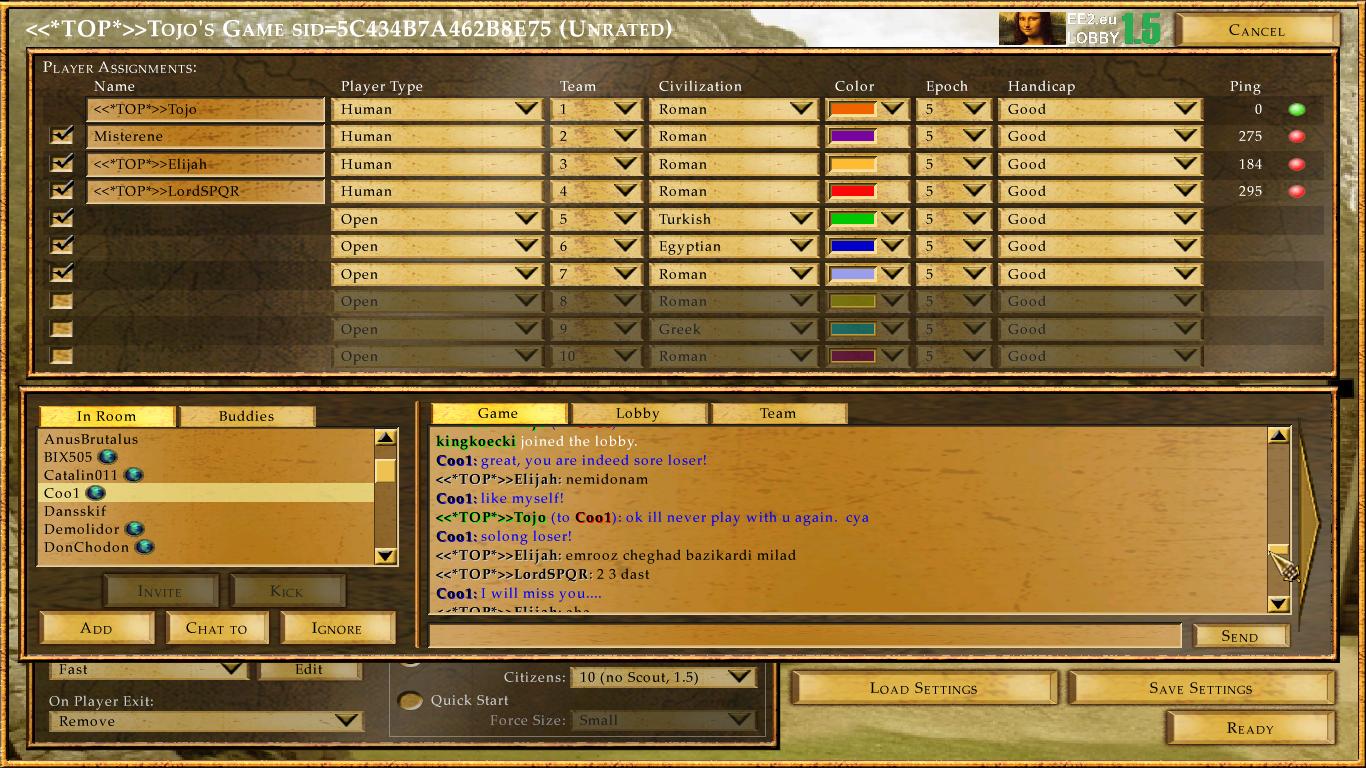 That hurted me very much and my day was ruined due to lies and insulting. I was in bad mood for all the rest games

. So I reported it now because I want to prevent him to ruin other people's days, when they want to enjoy EE2. I wrote that as normal member of community but as a Minister for Department of EE2 Promotion and Propaganda I despite all offensive behavior and Coo1 should be ashamed of himself. It's ok to share your opinion, but it's not good to force your philosophy to others and to be arrogant. All I want is healthy community so I can promote the game better.

I hope some actions are going to happen against Coo1, so there will not be any more ruined days.
Best regards!
Top

Thank you for your report. It is very helpful in keeping the community safe and friendly for all players.


Then he started that why I only post games that I won and don't post the ones that I lost. Lets clear this: I don't often post games, I did only 1 playback, it was vs. Kay which was posted not because of win but because its thrilling. unusual. About game recordings. I have 3 games on Youtube 2 were posted to show clan members how i play, 3v3 was posted because I rarely record games and it is the only game I had where <<*TOP*>> members are in 1 team. So it's appropriate to post it.

You don't need to explain it. Everyone has rights to post any games. There is nothing wrong in only posting victories (those games are usually rated by us as "good"). Even on my YouTube channel I've only posted 1 or 2 games where I lost, out of ~50 or more.

Regarding this case, I would like to hear if someone else has similar experiences/problems with Coo1.

Tojo's complaint against Coo1 has been duly received and in the face of the animus injuriandi practiced, I, carrying out my duties as a minister of justice, demand ex officio that coo1 provides further clarifications with regard to this formal complaint made against him within 3 days. If this does not happen by the end of this period, appropriate actions will be taken by the Department of Problems Between Players and Justice concerning this case.
Top

I will try to add an automated method later, to display recent MoGA topics on Multiplayer Lobby welcome message.

Yes, of course, it must be 3 days after he is informed about it. and I agree It'd be interesting if there was an automated method to inform other players about damages made against our players community. It could also motivates possible transgressors to provide clarifications about their acts.

Anyway, I guess Coo1 wasn't informed or then simply ignored it... So my decision, as a minister, is simply to punish him with a warning (1 out of 3) in his profile for 3 or 4 months (Minister of Ee2 Affairs will decide if 3 or 4 months) + mute for 1 month until further clarification about it - if this is made, I will consider reducing my judgements' punishment. Thus, that should be enough to prevent other abusive attitudes from him and also could satisfy the demands of our injured player tojo without leaving a feeling of impunity.

Mute message during this period: "You have been ordered to provide clarifications about tojo's case on ee2 forum, please consider going there to reduce your 1 mute punishments' month effects."
Top

The mute reason has been modified and is the following:
Your last message: "[message]" was not sent. Reason: You have been muted by the Ministry of Game Affairs due to report case: viewtopic.php?f=58&t=5172 Please provide clarifications or apology in the forum topic to remove the punishment.

As soon as the public apology (in the forum topic) is received, the mute will be removed.
In case of clarifications without the apology - the Department of Justice will decide what to do.
Best regards,
Dr.MonaLisa
Ministry of Game Affairs
Department of Control and Complains
Top

I was surprised that my conversation was considered offensive. I explained my intentions in LEGAL and grammatically correct words. In those pictures posted other players "stfu" many times, which means "shut the Freak up" -- this is far more offensive than '"you are a sore loser." Little boys should not complain and whine...
I don't frequently check this forum.
Top

Thank you for your clarifications, Coo1.

I have contacted the Department of Justice directly to re-check this case as soon as possible.

Topics posted in this subforum are now displayed on the Multiplayer Lobby join, so it should help in the future.
Best regards,
Dr.MonaLisa
Ministry of Game Affairs
Department of Control and Complains
Top

Thanks I appreciate, even though I could care less...
Top
Locked
41 posts