This act is to protect ALL players. Not ~eW` or me. EW has alreadz security created by Administration. For insult on me player is kicked by script from December 2011. So point of this act is protecting normal, curtular players.
As we can see 11 players wants this act, due that they don't like behavior on EE2 lobby. If you want to insult someone then you be still able to. Just with "censored" words. Also ACBA isn't blocking "fu**ing", "bitch" to the fu*k. Read all act again to see what it be doing. It be giving WARNINGS only for full insult sentences like: "Son of a bitch". It be giving warnings for sentences, not for words.
And if you want to insult someone, then do it on Private Message. If you post insults in public place like Lobby, then it's Cyberbullying, and this act is 100% right.

Thanks this Act I won't hear more messages like: "Patch pls ban he insult me". I'm receiving messages from random players, and I did idea for this act for them. If it would offend me or eW, I would do something without any act...

EDIT:
If there be difference less than 4 votes, I'll send case to Constitutional Court (Crists Staff of EE2), to be sure this Act is legal and right.
Best regards,
Dr.MonaLisa
Ministry of Game Affairs
Department of Control and Complains
Top

It's still ridiculous and it looks like you're trying to control everything, you aren't the king of the lobby or the owner of ee2, we're just an active clan. Kicking someone because of stuff that has happened MANY YEARS should not happen. If they can't handle lobby fights then they should again just use the ignore button which is featured IN THE GAME. If they don't use the ignore button then it's their fault.

I also think kicking people because they insult just you is wrong.
Ministry of Game Affairs
Department of EE2 History and Oldschool Players
Top

1. I wasn't "minusing" your posts with reputation system:

So I don't understand why you gave me ~6 minuses. I understand all opinion, and I'm not giving negative reputation points for this.
If someone did it, then it wasn't me, but person who didn't agree with your post. But nvm now, it was just information.


It's still ridiculous and it looks like you're trying to control everything, you aren't the king of the lobby or the owner of ee2, we're just an active clan. Kicking someone because of stuff that has happened MANY YEARS should not happen. If they can't handle lobby fights then they should again just use the ignore button which is featured IN THE GAME. If they don't use the ignore button then it's their fault.

I also think kicking people because they insult just you is wrong.

If I was the "owner" of EE2 I wouldn't make topics like this. I would just do it. In this poll we can see actually, that more than 50% of players agree with this Act. It doesn't matter if they didn't write it here. Negative comments number means nothing, while 57% of players voted "YES - Allow".
Also you're keep talking about "kicking", and I told you like 10 times in this topic, that it's going to be "warning system" (which is already on the lobby for long time, just not automatic). Warning system ISN'T KICKING but is giving warnings/information that player should change his behavior. 4 warnings = 1 kick, and then list is resetted.

And stop talking about Ignore button. I don't need this shit, and I don't even care if someone's talking shit. But I have ~3 reports per day about "insulting" and that I should "ban someone". I wrote idea for act in the name of all players which are annoyed with behavior of shit-talking people.
And I agree with them. If you're going to talk shit, then do it somewhere else, not on the lobby which can be read by everyone.
Automatic warning system will solve all problems, that's why I voted "YES".
Best regards,
Dr.MonaLisa
Ministry of Game Affairs
Department of Control and Complains
Top

finally people are starting to see it

Anyways, nothing this does even affects me as i can't get kicked lol

also i votes Yes,,,,,
but my Opinion is it Bullshit to do this

but it is ok cause its only fag , or bastard, etc.
so i can write to Mkl suck my cock lol .......
and i did vote Yes cause mona cryed me pleas do it pls here all can see :

KayOne posted this bullshit, but it doesn't change fact that I explained him EVERYTHING on Xfire: 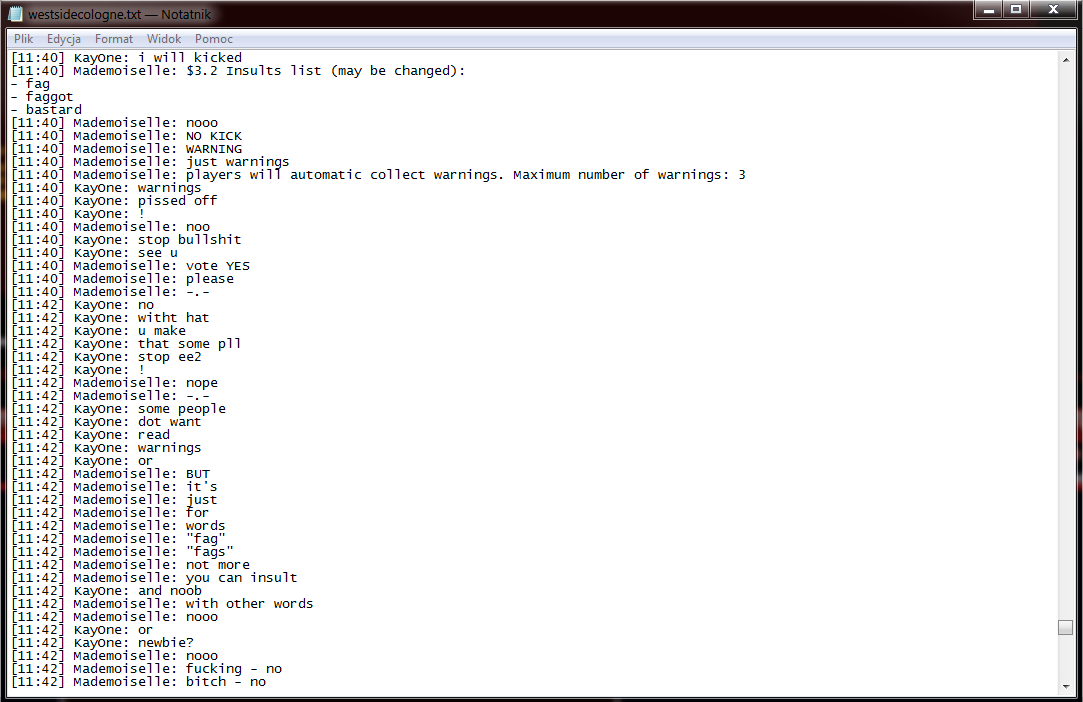 He was asking me, I was giving him answers. Then he decided that it's not dangerous at all.
As I said, it won't give warnings for popular words, just for full sentences insults.

So it was KayOne's decision, after I explained him everything.


EDIT:
Btw. I'm wondering if you guys are voting "NO" for this act (even when you didn't read it good), or just vote "NO" because of me? I think you just voted like "DEUS" because he's jealous that I'm making such things for EE2. I think you guys good know that this act isn't dangerous, but you're negative, just because I gave idea of this act. I understand if it was act about "kick" for insult... But it's ACT "warning" for cyberbullying, not for insult. As I said it will react on full sentences, not just words.
And just note: The most talkalive/negative people are players which aren't playing EE2, and doesn't know what's happens there. Of course you all have right to votes, but talking that "this act make players stop playing" is stupid while you guys are not on EE2 anymore, and you can't even imagine what's good for EE2 and what is not.
Best regards,
Dr.MonaLisa
Ministry of Game Affairs
Department of Control and Complains
Top

Mona stop this shiit poll, you make Kay_One to vote on your poll "YES" but it's not his decision, he is totaly desagree with you and people in this topic too.


and you can't even imagine what's good for EE2 and what is not.

You can imagine what is good for the world too maybe? I think you need stop.

you did good to make new patch 1.3, You can't be good everywhere, people can be desagree with you, you need accept it, then stop your poll ACBA and close it.

The people can defend themself, we don't need ACBA to defend ourself.

Don't cry Mkl. I understand that you like to shit-talking on the lobby, but since this act has more than 57% positive it be accepted anyway.

It was KayOne's decision about his "VOTE" and I explained him everything on Xfire, so stop talking gossip that it's not his decision -.-

ACBA is active on EE2 for almost 5 days. Did anyone got kicked? NO. Did anyone receive warning? NO (for already 3 days), so I can't understand how ACBA can be bad for EE2 while for 5 days it didn't kick anyone. I understand if it was banning or something... But it's just warning system. If you don't want to read "warning" messages from BOT, then press ignore button on him, then you won't see ANY messages from EE2-Patch1.3 Bot. Also when you're ignoring BOT he can't kick you... So where is prooblem?
Best regards,
Dr.MonaLisa
Ministry of Game Affairs
Department of Control and Complains
Top

Well, if you say that this ct changes nothing since nobody has been kicked yet, what's the point of installing it then?
Top

Timo wrote:Well, if you say that this ct changes nothing since nobody has been kicked yet, what's the point of installing it then?

Better security. If someone be insulting on the lobby, then I don't need to give him warnings from me, but System will give warnings automatic. So more free time for me, and players won't molest me with messages like "he insulted me, please ban him", because if they will I'll tell them that warning system is already enabled on the lobby.
Also script is ready, so point of istalling is that it has been already created and it should be used since it's not dangerous for anyone.
Best regards,
Dr.MonaLisa
Ministry of Game Affairs
Department of Control and Complains
Top

Lol people said to you "he insulted me, please ban him"? Wow xD
Top
Locked
36 posts