The mounted special units (Spahi, Hwarang, Elephants) seem to be quite overpowered in epoch 1 games with low res start.
Many multiplayer games are over before they start because of Spahi rush.

I have a patch idea to balance this out.

In game settings, where you choose starting rescources, there should be a new option:

Low (1.5 - Eight tech points) The rescources are the same as in low, but you also get 8 tech points.

You still need university to research "projected flute(?)", but it will be faster and I think enough to defend early spahi agression.

What do you think? I think this will make it more fun to play 1-15 games, and in r-r games that start with epoch 1 it is still possible to win if you play good.
Top

As first, the patch description claims:

Please note, that the patch doesn't change the original game balance nor strategy. All new units and buildings listed in the changes list below can be disabled by the Configuration Utility (UP1.5 Settings) after installation, so you don't need to worry about changes which you don't like. The patch was designed to fix compatibility problems, and the rest is not that significant.

The only exception were Tanks and HERCs which were too weak and never used in game. But this was also based on the low number of games played in high epochs. The anti-missile system, tanks & HERCs tweaks had positive effects, where high epochs started to be played.

Now about the Spahi. There are "oldschool" settings called Turk War, where people choose Turkish civilization from the start (1-15 med pace, 5 citizens if I remember correctly). I don't want some old player to return to EE2, and dislike the patch, just because the settings they played in the past are not playable anymore. So every balance change is just dangerous, especially when it's not an optional option (like "disable crowns system & leaders", "no scout"). UP1.5 got mostly popular because of non-invasive changes which keep the "vanilla" experience. So absolutely changes to unique units will not be made. Unique units were always strong, like the Chinese cannons in epoch 6, British horses in epoch 6, Inka cannons in epoch 11, Japanese fighters, and so on.

I understand your idea and the reasons of posting it, but the solution is much simpler than you think.
I was writing it many times on the Multiplayer Lobby, Discord, Support Chat, etc. The Multiplayer community should stop playing the R-R settings with random civilizations. It's always broken and random. R-R games are almost never about skills, but about the luck with a civilization. I stopped playing r-r a long time ago and I demand changes to a fixed civilization (Roman) or I go to observer mode.
So the solution is simple: interrupt the "uRs", "TOP" and other low-skill players propaganda and start playing games with a civilization selected manually. It will fix all the problems. At some point I wanted to remove the "Random" option from civilization choice with a minor update (and then re-add it after few months), but that would be too much interference in players choices.

So sorry, but the balance can't be changed with UP1.5, which is used as the "base" for other mods as well. I have a little bit more reasons to keep the official balance (no matter how bad we think it is), but that would be a lot of possibly non-understandable text to read.
Best regards,
Dr.MonaLisa
Ministry of Game Affairs
Department of Control and Complains
Top

Thank you for considering my suggestion and replying with a detailed description.
If you ever change your mind, I would highly appreciate it if you add this "starting rescources" setting as an addition.

I think that many players, (including me) like the variation that games with random civs offer and will continue to play this setting.

The setting that will allow a start with eight tech points will be a choice, like starting without a scout is a choice that was added.
I dont belive the change is about changing the balance of the units or civilizations, but they make it easier to build a fast outpost.

That being said. You put so much time and effort into making this game great, thanks a lot, that is also highly appreciated.

Thanks for replying back. I kind of ignored the middle part of your post (shame), and wrote "from memory" about the balancing thoughts. It's because I was in a louder room when was reading it.

If this is as a new option, then it's fine. However: I remember we had problems adding more resources options, this is why in 1.5 "High" option is replaced by "Deathmatch", and "Deathmatch" is replaced by "Super Deathmatch". I was planning to focus on assembly work in order to allow more resource options (to restore the High resources option), so whenever I figure it out, we can add the new "low" option with 8 tech points.
Best regards,
Dr.MonaLisa
Ministry of Game Affairs
Department of Control and Complains
Top

Thanks for looking into it. I confirm that I meant adding a new option. I hope you figure it out.
Top

I have good news: 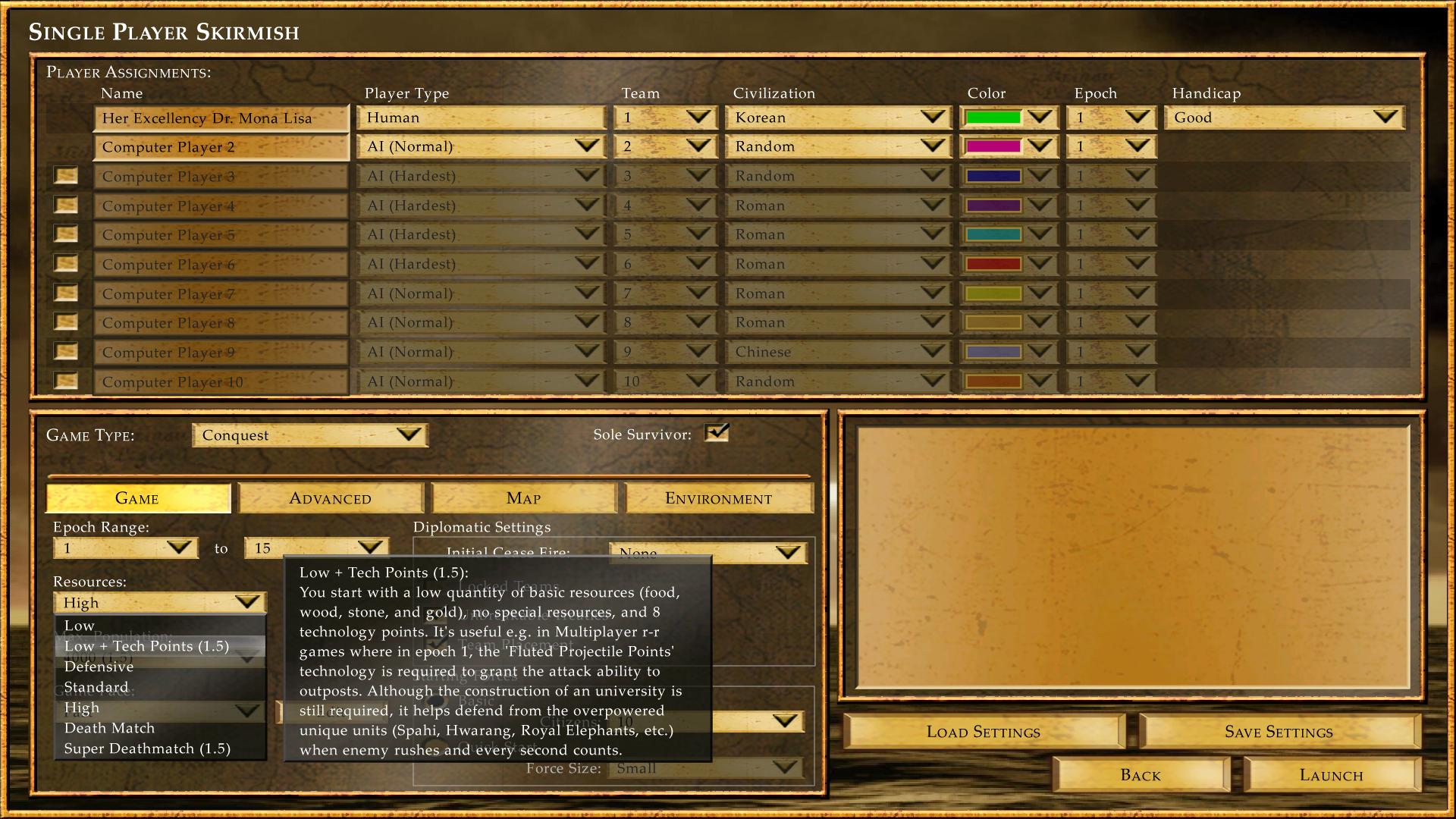 
The upcoming 157038 update will have the following changes regarding starting resources:


- Starting Resources option changes:
* Restored the "High" resources level which was replaced by the "Deathmatch" in the first version of UP1.5.
* "Super Deathmatch (1.5)" is now present as a new option.
* Added a new "Low + Tech Points (1.5)" option. It's the same as "Low", additionally with 8 technology points. It's useful e.g. in Multiplayer r-r games where in epoch 1, the 'Fluted Projectile Points' technology is required to grant the attack ability to outposts. Although the construction of an university is still required, it helps defend from the overpowered unique units (Spahi, Hwarang, Royal Elephants, etc.) when enemy rushes and every second counts.

The update will most likely be released in September 2020. For now, we don't have many changes regarding compatibility, or anything important that could speed up the release.

I'm worrying how the AI will behave with the new population options. I really hope they use the resources level name (text) instead of the number in order (enum). In the settings.cfg file, it seems to store the name, so should be fine and not affect game saves, playbacks, etc.
Best regards,
Dr.MonaLisa
Ministry of Game Affairs
Department of Control and Complains
Top

Great news. Thanks a lot. I’m looking forward to testing spahi rush with the new setting after the next update. My fingers are crossed regarding the AI performance.