While having tons ( a mean into thousands ) of resources, military buildings stop production. I know because I do *check* military unit production in the buildings. Strangely it happens more often when playing seasoned players. When playing beginners, this never happens. I cannot explain it and this really puts a dead cross on this game...

I feel like I have to find another RTS game. I noticed this "glitch" many times. It never happened in years before, but lately, say approximately a few months it started to appear more and more often. I am not accusing anyone, I am just saying that in this state the game is not competitively playable. Regardless how much I like the game, it is not possible to have fun, knowing that during the play you are not getting things done.

If this is really happening, the only way to detect it would be recording a game. And I'm talking about the real screen recording, not the playback file. That would explain everything.

We're not fairies. This could be anything, starting from a miss-click, to unit type / resources change by the epoch advance, ended on a lagging player with the high ping, which causes commands drops, so that the button click is never executed.

For me (and for most of the players) this problem has never happened. And I'm playing games with 300+ barracks built as well. This has been mentioned only 1 time, by another player on the Support Chat, and he mostly plays only Singleplayer games. Since I can't see a problem like this, I assume this is an user error, which would be pretty easy to detect after seeing a recorded gameplay video, with mouse clicks, etc.

For me, the only problem that happens are lost commands at the game start. This is, sometimes when I click to send 5 citizens to wood, 5 to stone - they all might go to collect the stone. This is in 100% caused by high-pinger, or a player with bad connection. The solution is to wait 1 second before clicking another resource icon.

I cannot explain it and this really puts a dead cross on this game... I feel like I have to find another RTS game.

As far as I know, EE2 is the only game with the "cycle production" option. It was one of features that were never present in any other RTS games. Some people even find it as "too easy". So good luck finding a different RTS game, where you won't need to focus on unit production as little as it's possible in EE2.

Now something a bit personal from me:
Every week (sometimes every day) I read messages from players, on: Support Chat, Private Messages on Lobby, Discord, E-mail conctact form, Forums, etc:
- OMG after update it lags so much more! It never happened before, please fix!
- My game freezes more after after the newest update. It never happened before!
- I get more unhandled exception crashes, it never happened in the past!
- My units stop moving during the game, please fix it!
- Ships stop moving, it NEVER happened in the past!

Now, what would happen if I focused on all those reported problems? Literally NOTHING. Because they either don't exist, are placebo, rare or have been always happening.

According to users feedback, after so many updates of UP1.5, the game would look like this:
- After installing EE2 game would be unable to start for most of users.
- In Menu fonts wouldn't work.
- Shortly after game start it would start lagging like crazy.
- Units would not move, so it would be impossible to continue playing.
- Sometimes units cycle production would not work.
- Game would hang for few seconds.
- Finally, unhandled exception crash would appear.
- Loading the autosave wouldn't work.

Maybe it sounds funny, but this is the sad truth. Every single update is blamed for errors that happen to single users, and are mostly on their end (hardware, running software in the background, exaggeration).

I would be glad to help in this case, but not if I can't see what is happening. I hope nobody expects me to spend hours trying to find an issue which I NEVER experienced myself, since I played EE2 since I was 7 years old. At this stage: no proof == no issue for me.

How can I be sure it's not a whining after a lost game? For me this one sentence makes the whole post unreliable. It sounds like maybe looking for an explanation to lost games. If that's the case, then please think about me in the first steps, that I might be spending hours trying to figure out a problem that might not even exist.

Anyway, please try to find a software for in-game screen recording, with mouse clicks etc. if this happens again, you will be able to easily show the video, and everything will be clear / possible to reproduce.
Best regards,
Dr.MonaLisa
Ministry of Game Affairs
Department of Control and Complains
Top

Today I had yet another instance when my military buildings STOPPED producing units... I play more or less consistently and this happens only occasionally. Just now while playing 1 vs. 1 game, both players produced same amount of resources, civilians and claimed enough lands to produce units. We had just about same number of military buildings. I had plenty of all resources (!) and set building producing variety of units cyclically-automatically. I did check to see that I have enough resources and people working on it. EVERY FREAKING TIME I CHECKED BUILDINGS THEY DID NOT PRODUCE UNITS!!! I check builds religiously often. My army was around five times less than the other's player army, it was 285 in about 30 minutes gameplay! I played a game just before this one and did not have this problem. Must have I suddenly degenerated in the second game? I cannot understand this... I am not kidding... I wonder if someone else has the same issue?

The game was with player uRs..Batu I replayed the game and clearly see that the other player was inferior. Is it possible to have a sort of daemon sitting in RAM altering memory while playing? It could be loaded AFTER the lobby checks both executables. What do you think? I know and I have seen/used "trainers" used to be in Age of Empires. These trainers were able to reveal the map with the opponent units visible. I have seen it myself!

I can send you the replay with uRs..Batu, but in replay one cannot see military buildings production. At 25 minutes in game I see that the other player has +/- 123 military units and I have none !!!

I uploaded this game for you to review if you want. I cannot understand it. Please help.

Playbacks are useless when it comes to debugging this "problem".

If you really want to prove something, you should record a game to a video file (screen recording) as I guided in my previous post.

I should have ignored this report as soon as I knew that this file format won't allow us to know all actions made by user.
Stupidity I have a good heart, and decided to verify it anyway. Wasted 1.5 hour to watch the playback 2-3 times to see that the problem doesn't exist.

All buildings (barracks, stables) produced units all the time (except workshops, which cycle production you didn't enable for long).
Even advancing to the next epoch did not stop production (probably units type/costs didn't change): Around 20th minute of the game, we can hear the "beep" sound which occurs when unit production is cancelled (right click on the icon): After that I slowed the playback a bit to observe if units are still being produced. No problem, each time new units were coming out of stables / barracks.

The next 7-8 minutes, Blue player have won the battle in your right territory. You didn't change the rally point. All newly produced units from barracks were going straight to the place where he had more units.

Then you claimed on chat: 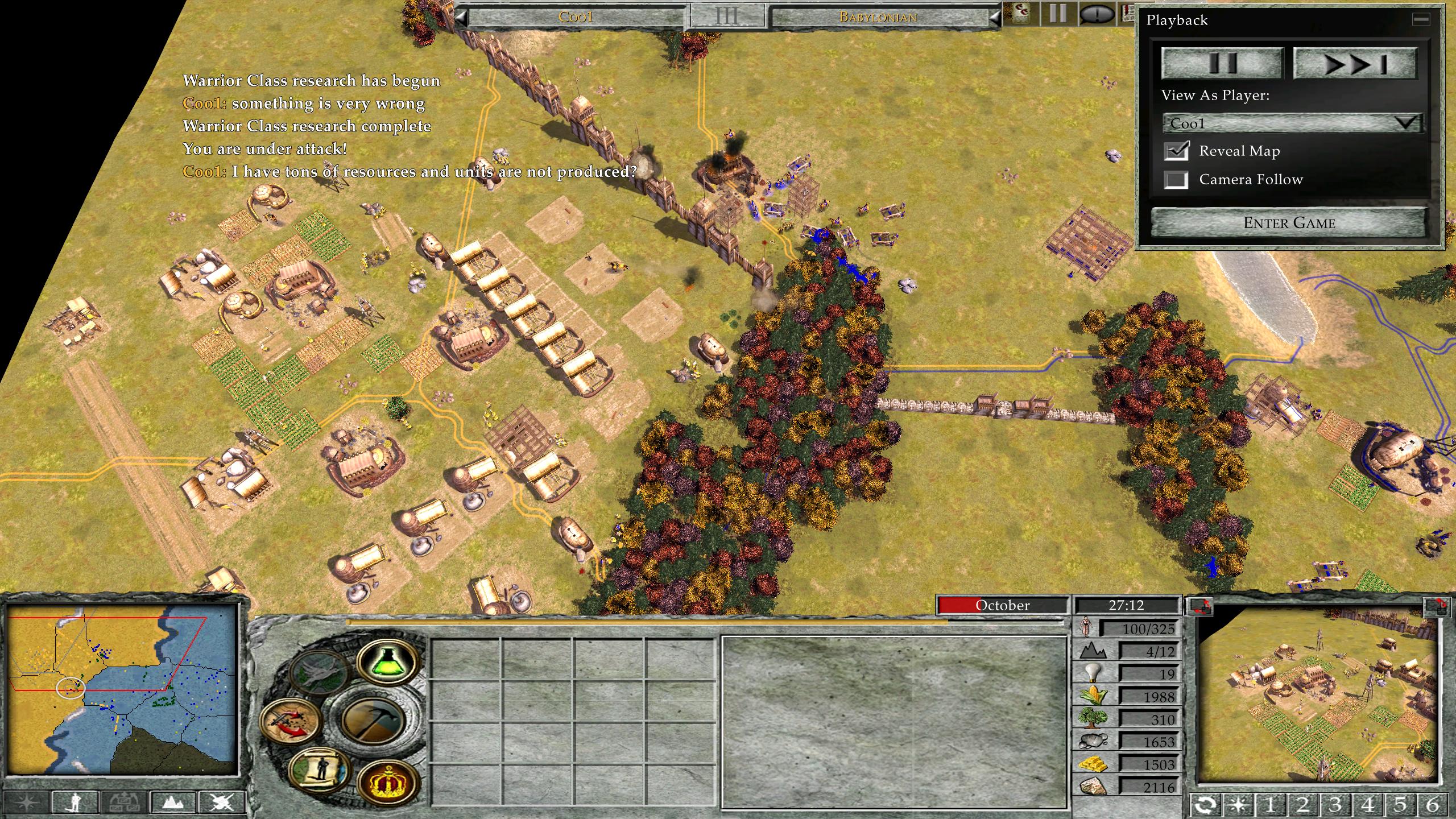 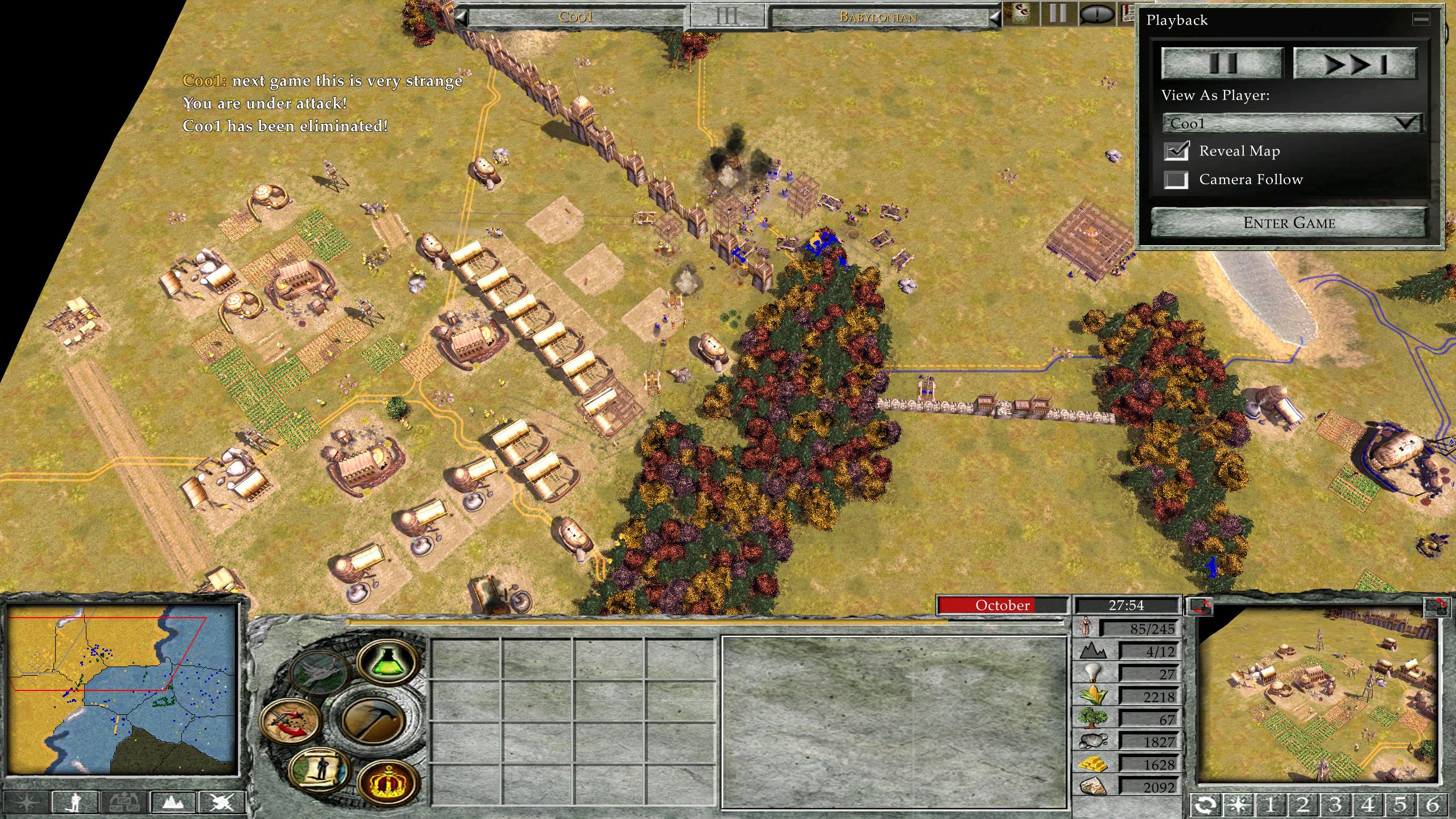 So I used the "Enter Game" button to see what's going on: 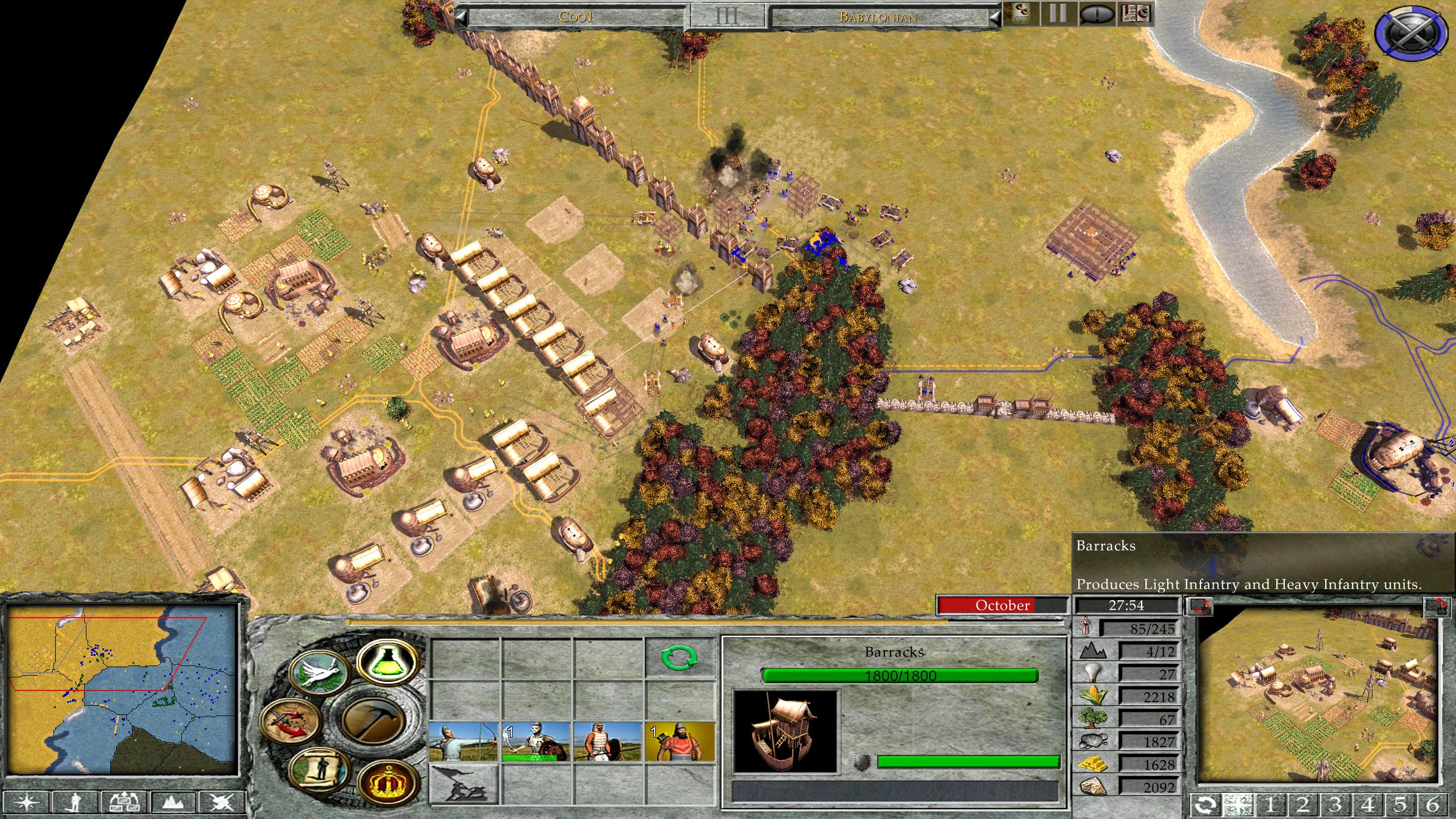 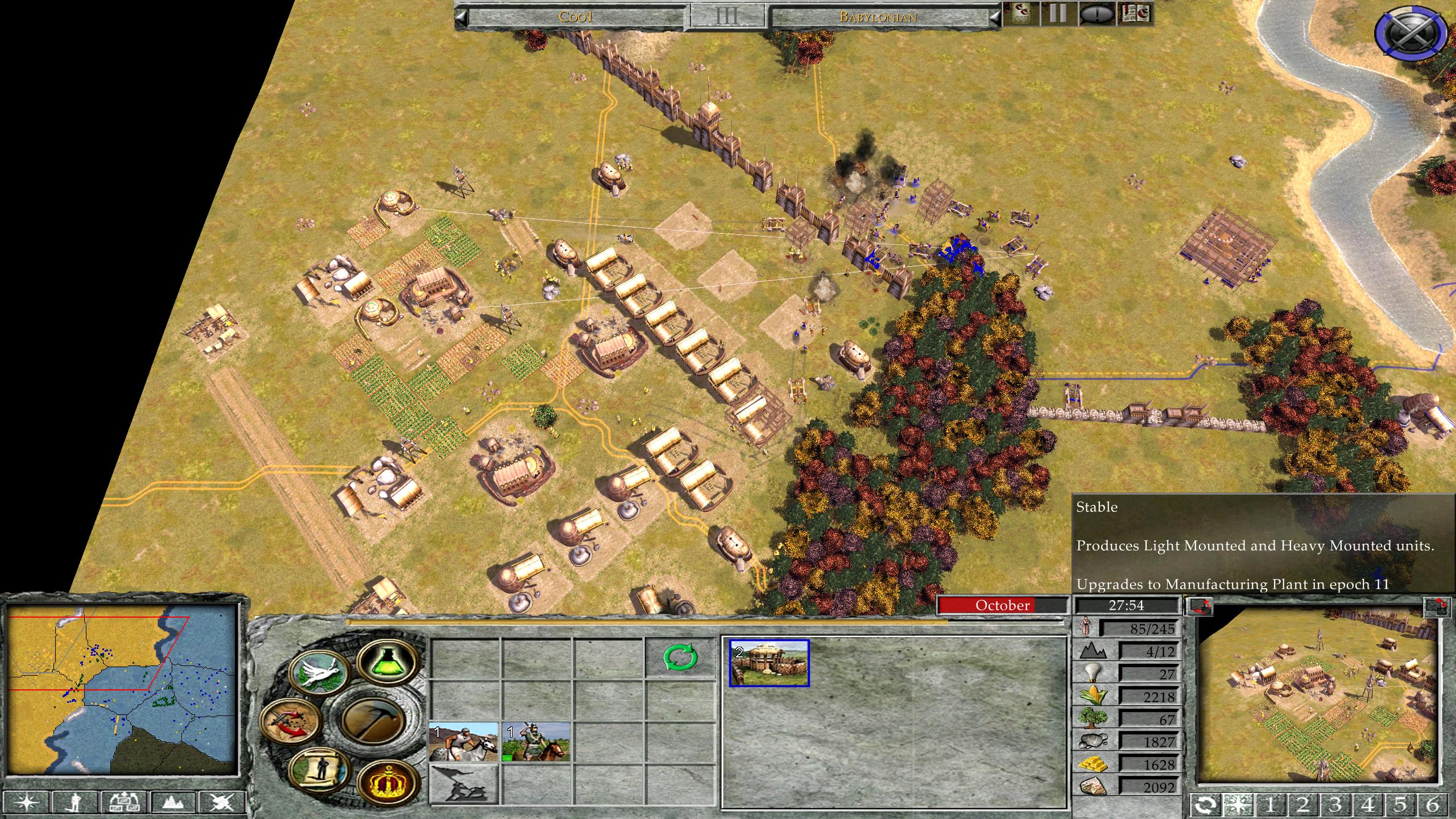 We had just about same number of military buildings.

For some reasons, game statistics show something else.
You lost MUCH more units by the bad army control: 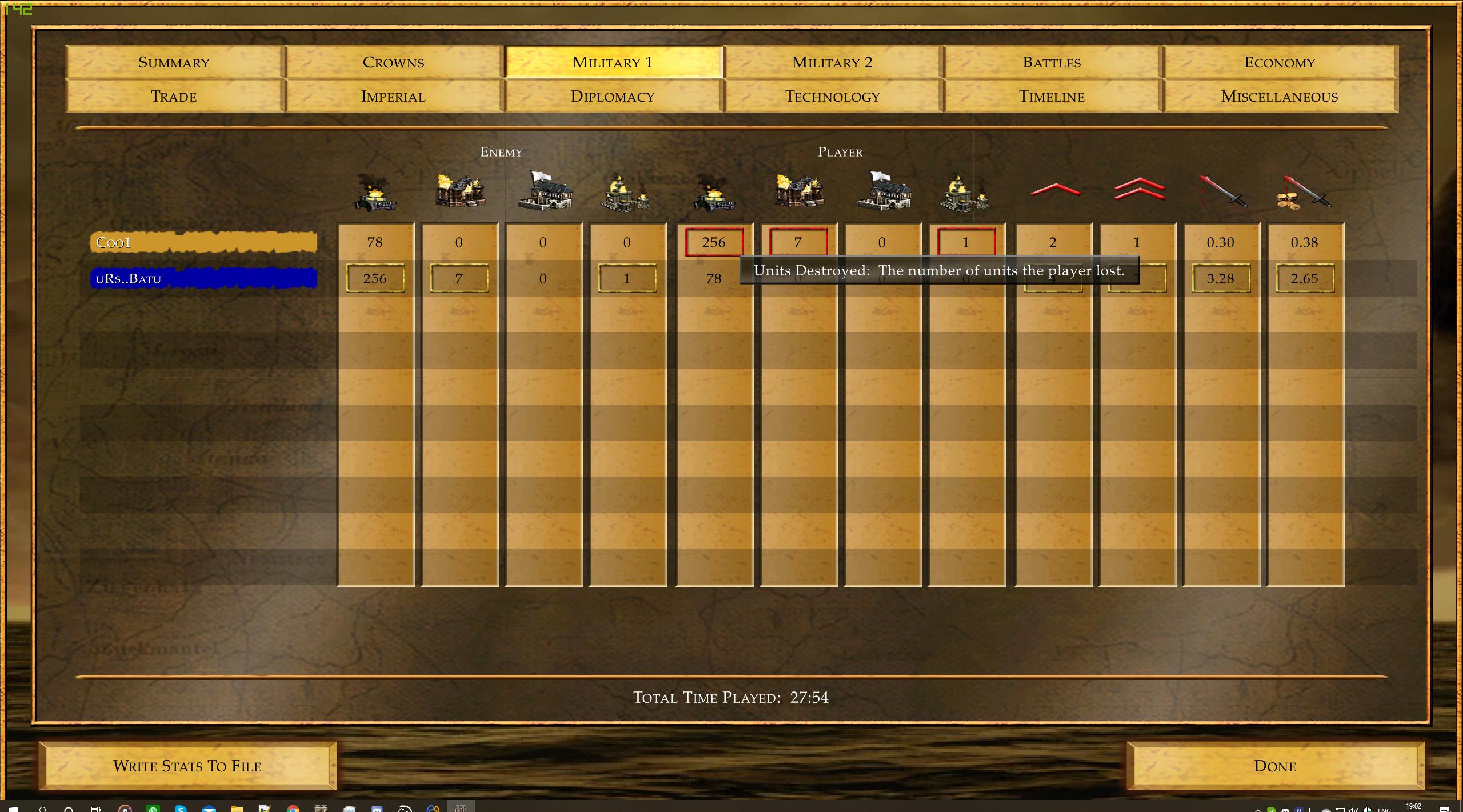 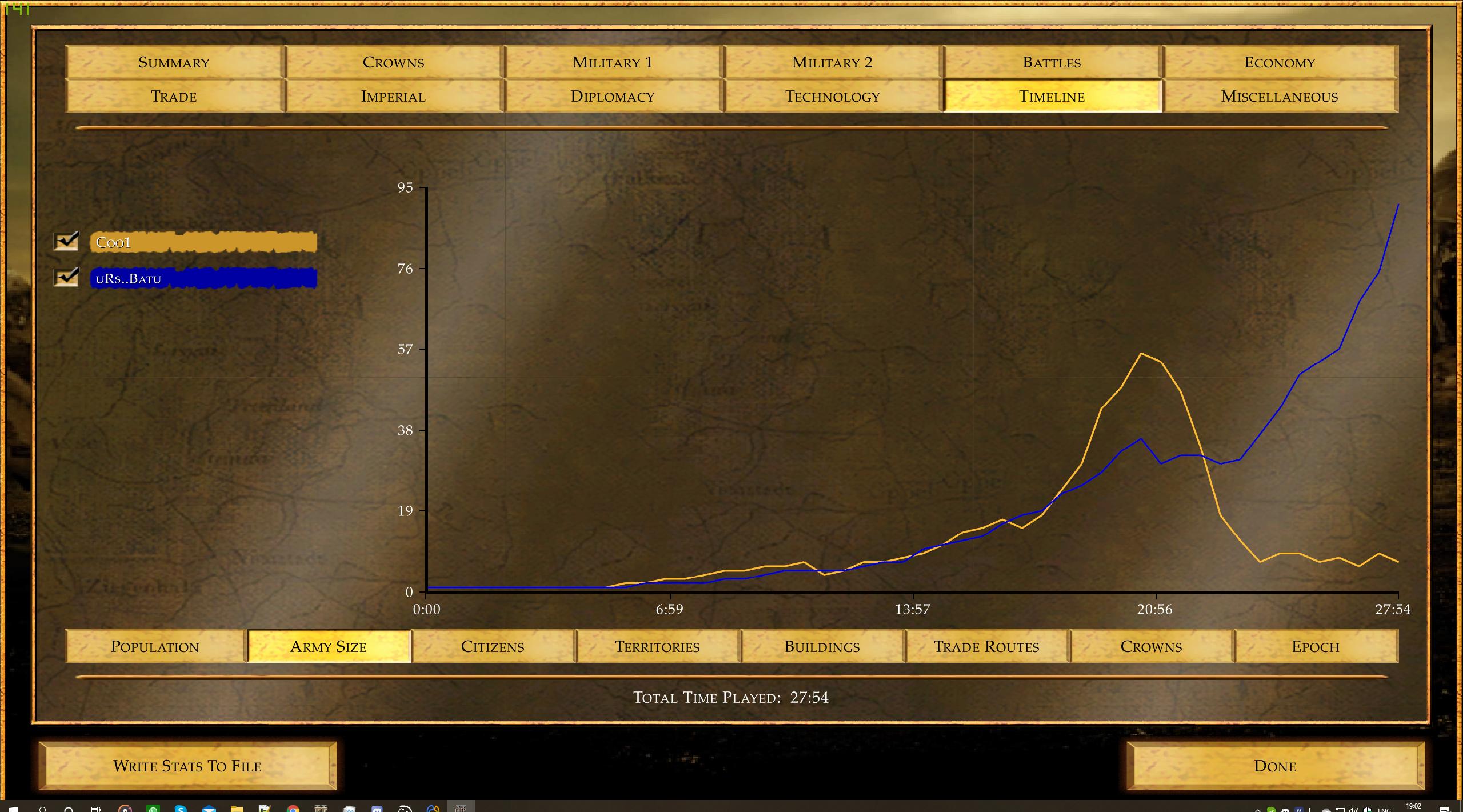 Kill ratio 0.3 caused by selecting wrong unit types and horrible army control. Army size shows you actually produced MORE units, just lost them in stupid way. I'm asking, HOW IS IT POSSIBLE THAT YOU PRODUCED MORE UNITS, IF YOU CLAIM THAT YOUR BUILDINGS STOPPED CYCLE PRODUCTION?!!!

I suppose you watched this playback file before uploading? If yes, why didn't you come to the same conclusions as me? What stopped you from counting seconds before each new unit comes out of barracks?
I'm treating reported game problems seriously, but this looks like someone is just trying to waste my time. Maybe it's time to learn how to lose, and that there are better players than you?

Future reports regarding this issue will be verified ONLY after uploading a video file (MP4) of the fully played game.

Maybe I should change my nickname to Mona Kardashian,
Best regards,
Dr.MonaLisa
Ministry of Game Affairs
Department of Control and Complains
Top

I recently played Coo1 and he claims that I am using other tricks to stop his production of military units.

He has offended me several times.
I tried to explain them that it is probably he himself who inadvertently stops the production using some shortcut keys (it happens to me too, but paying attention I no longer had this problem).
Long life and prosperity.

Thanks for the information, IndieRock00.
Coo1 was also attempting to write this "buildings stop production" bullshit to me on Lobby.
I have explained 3 times before, that the only way to confirm such things would be gameplay recording to mp4. He totally ignores it and continues his speeches like some tape in loop.

I'll bring the attention of the Department of Justice to this topic.
Best regards,
Dr.MonaLisa
Ministry of Game Affairs
Department of Control and Complains
Top
Post Reply
6 posts • Page 1 of 1