Leader wrote:fsn2015 - just copy file: "DbFrontEndDefs.h" from zips_ee2x folder, and paste to your unpatched version folder (zips_ee2x, not needed to put into hdrs.zip file). Remember that you also need to find a texts file, and add new population options there. It should be in some ee2x_db.zip/Texts/*.utf8 file.
Remember, that you can disable UP1.5 Units and Buildings in the Configuration Utility after installation.
If you still don't like bug fixes included in the patch, you can use the version for developer's, without changed files structure: http://forum.ee2.eu/t1731-development-d ... or-modders


Awsome! Thank you very much!. By the way, the text file with pop options is: \zips_ee2x\EE2X_db.zip\EE2X_db\Text\dbtext_enums.utf8

by Dr.MonaLisa
DirectX 9 support in the next update!
Currently Empire Earth II uses an old DirectX 8. I'm working on a .dll file which will convert the game to use Directx 9. It will be an experimental option, disabled by default, but... it will be awesome!
What will Directx 9 change?:
- Some graphics in game will look much better.
- Performance improvement. I had not much time to test it, but the game has more FPS when using DX9.
- It fixes a bug, where Empire Earth II sees only Integrated GPU (Intel HD) and it's impossible to use a different graphics card (common problem on Windows 10 and

, especially on laptops with NVIDIA Optimus.

I hope you guys are excited of it

by DannyIwakura
My game crashed :c 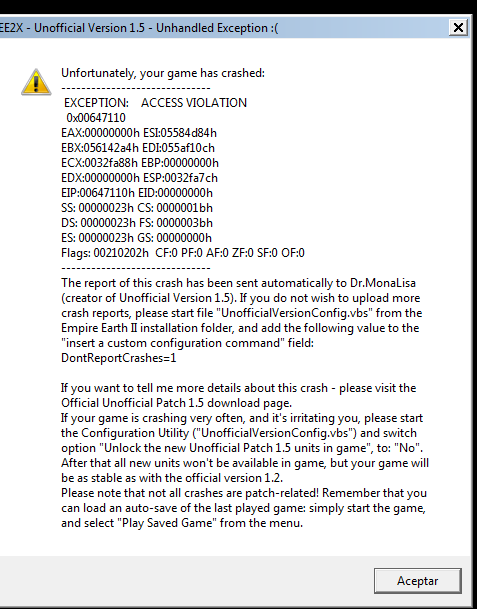 by Dr.MonaLisa
Minor update 154003 has been released!
Most important changes:
- Better UP1.5 Settings window. Clearier, with more options, for example:
* "Skip Game Intro Videos".
* "Clear Cache / Recompile" - it will clear game junk files, and help to solve common game / launcher problems.
- Experimental Support of DirectX 9. Performances improvement in game, fixes a problem where only integrated graphics card is detected by game (NVIDIA Optimus problem for example on Windows 10). To enable DirectX 9 - please start "UP1.5 Settings" in the Launcher after installation.
- Experimental FIX for graphics problems on Intel HD graphics cards (fixes no fire/explosion effects bug). Please use this fix only if you really need it.

by Dr.MonaLisa
Avira was detecting EE2.exe / EE2X.exe as malicious:
I got an information, that Avira Antivirus was detecting unofficial patch launchers as "TR/Crypt.XPACK.Gen2". Of course it was a false positive alert, however I contacted Avira Lab in this case, and here's the anwer: 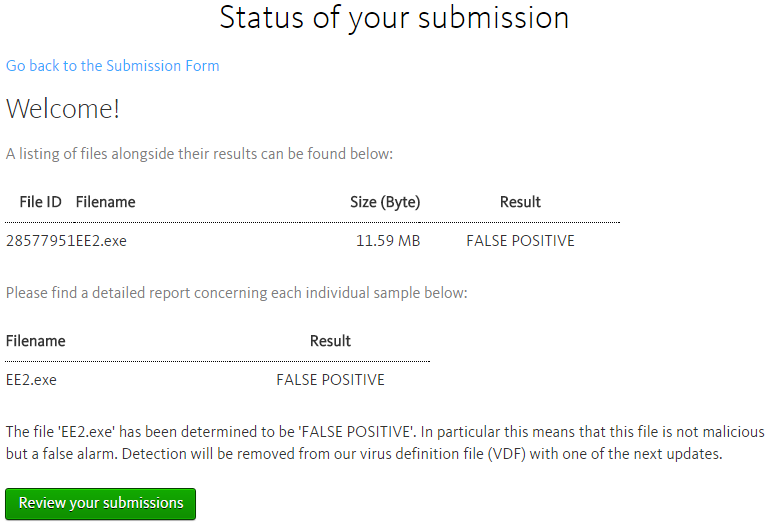 I noticed that false positives started after I updated compiler from "Visual Studio 2013 - Windows XP (v120_xp)" to "Visual Studio 2015 - Windows XP (v140_xp)" - that's why, I decided to revert back, and I re-compiled the launchers using v120_xp. The "updated" launchers are already in the patch installer.
If you're still getting a virus alert, please read: http://forum.ee2.eu/t1723-ee2-ee2x-empi ... #antivirus

I have a little suggestion: In the random map creation options, there is an option for "single territory per player". but wouldn't it better to set a factor/number to set the average territory size. that would be super!

by Dr.MonaLisa
Hey. Unfortunately I can't add more buttons to the game. All buttons are hardcoded. The "1 territory per player" option was available but invisible (developers option), so I just unlocked it.

by gnleugim
oh, how unfortunate

I guess you can't also mod what they do I guess. So, only by changing the config files we are able to change territory sizes then

by Dr.MonaLisa
I never tried to change territory sizes by config.cfg, so not sure if it works, but worth try