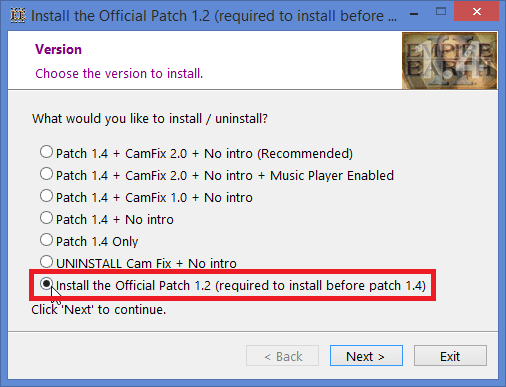 PLEASE REMEMBER, TO CHANGE YOUR GRAPHICS SETTINGS
AND SCREEN DISPLAY RESOLUTION IN GAME SETTINGS AFTER INSTALLATION 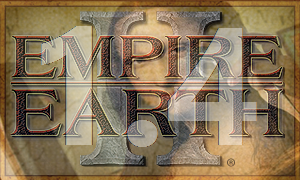 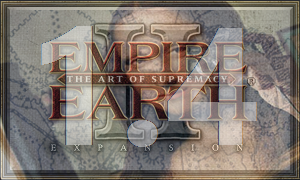 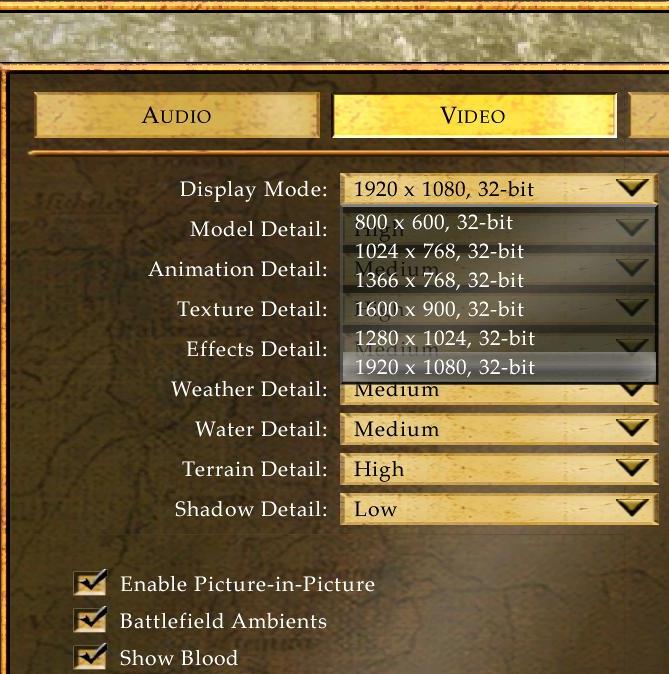 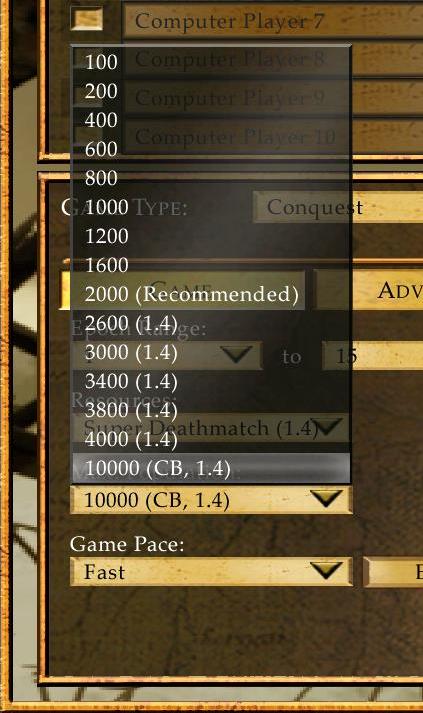 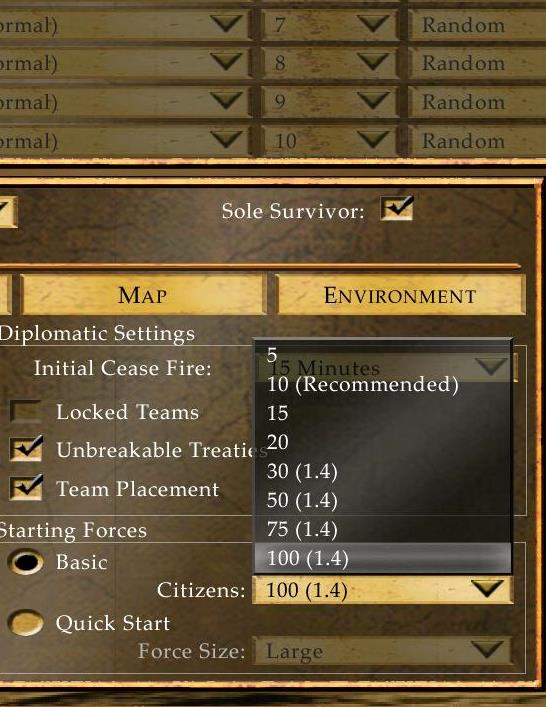 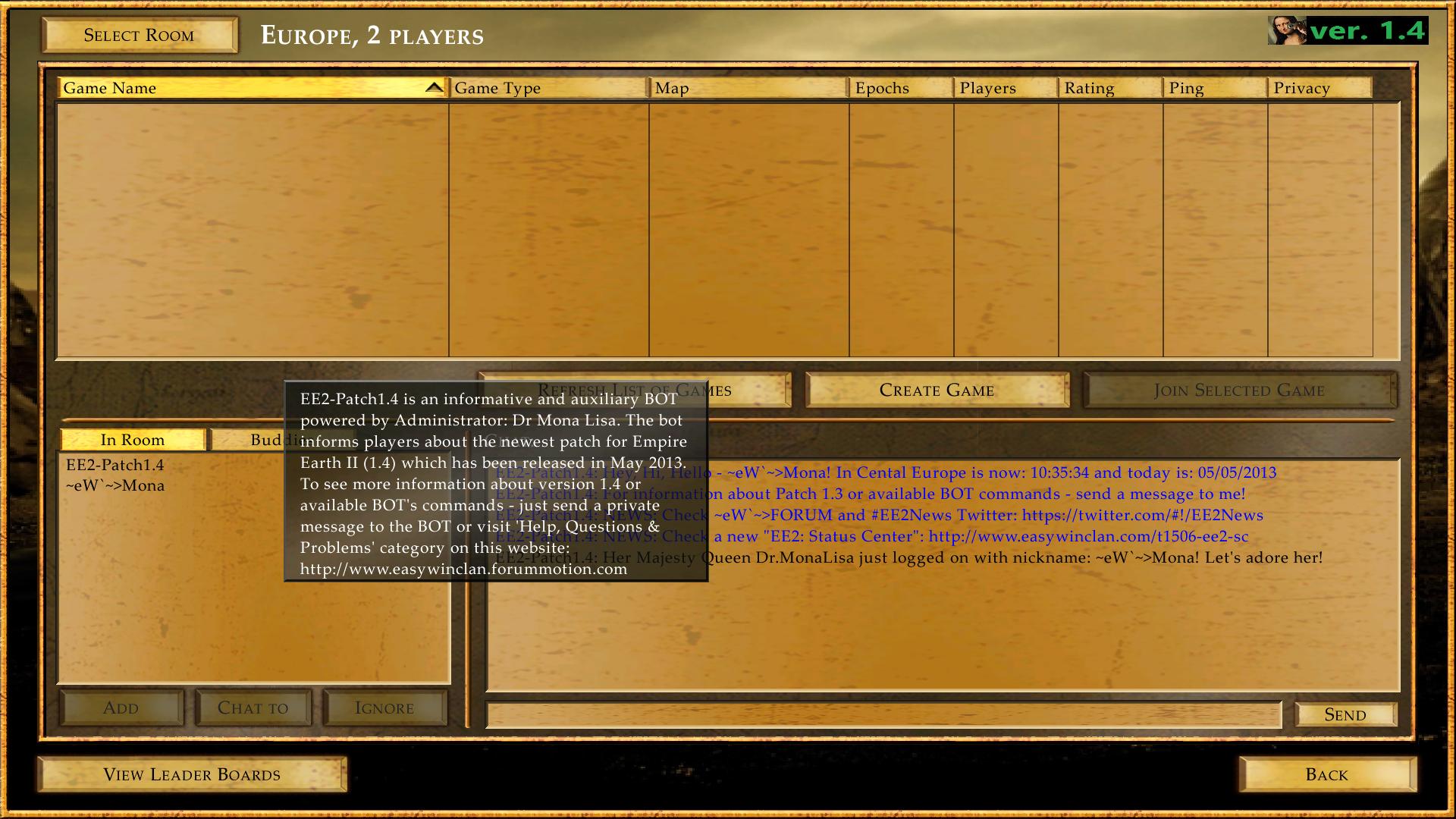 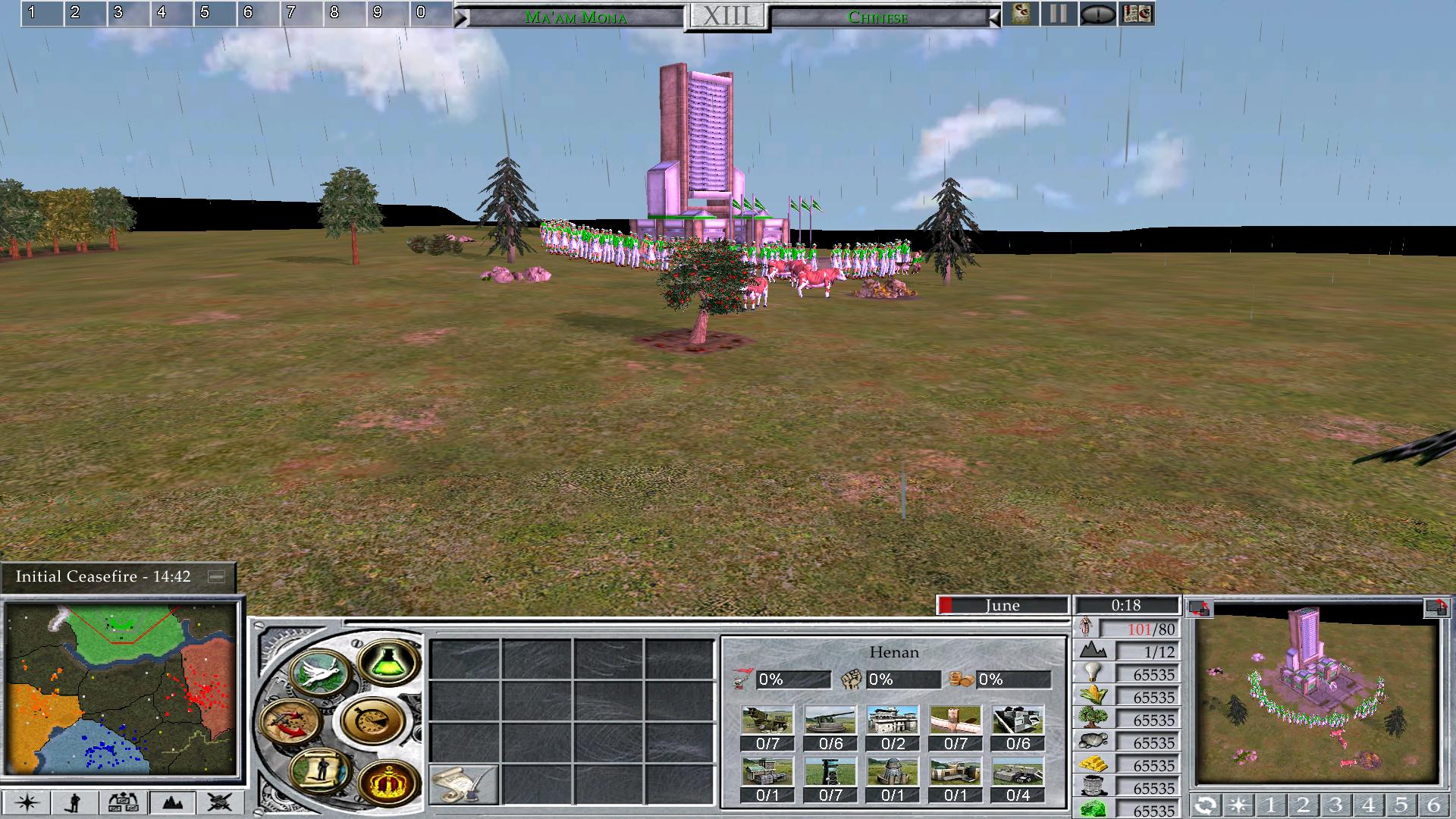 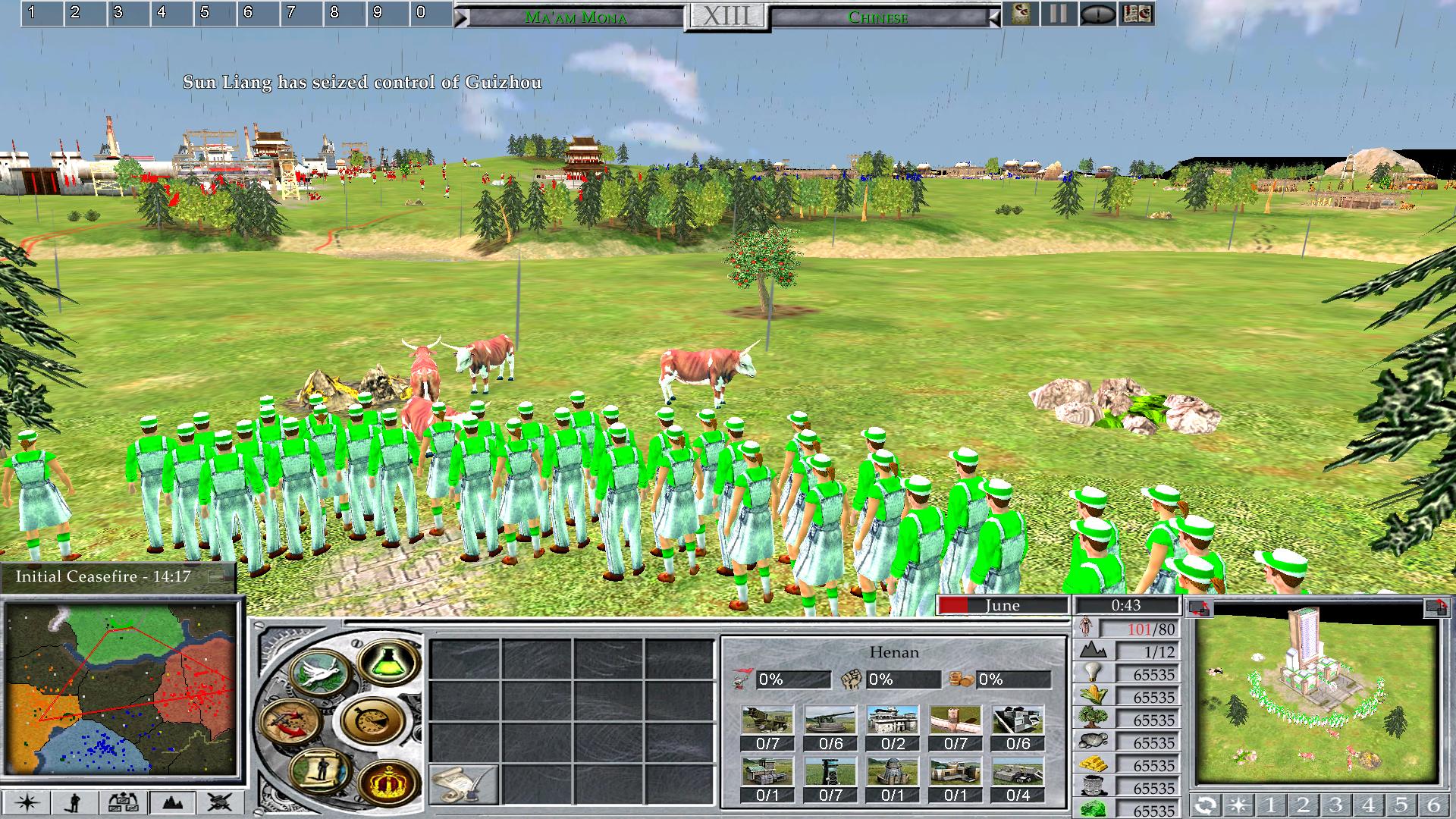 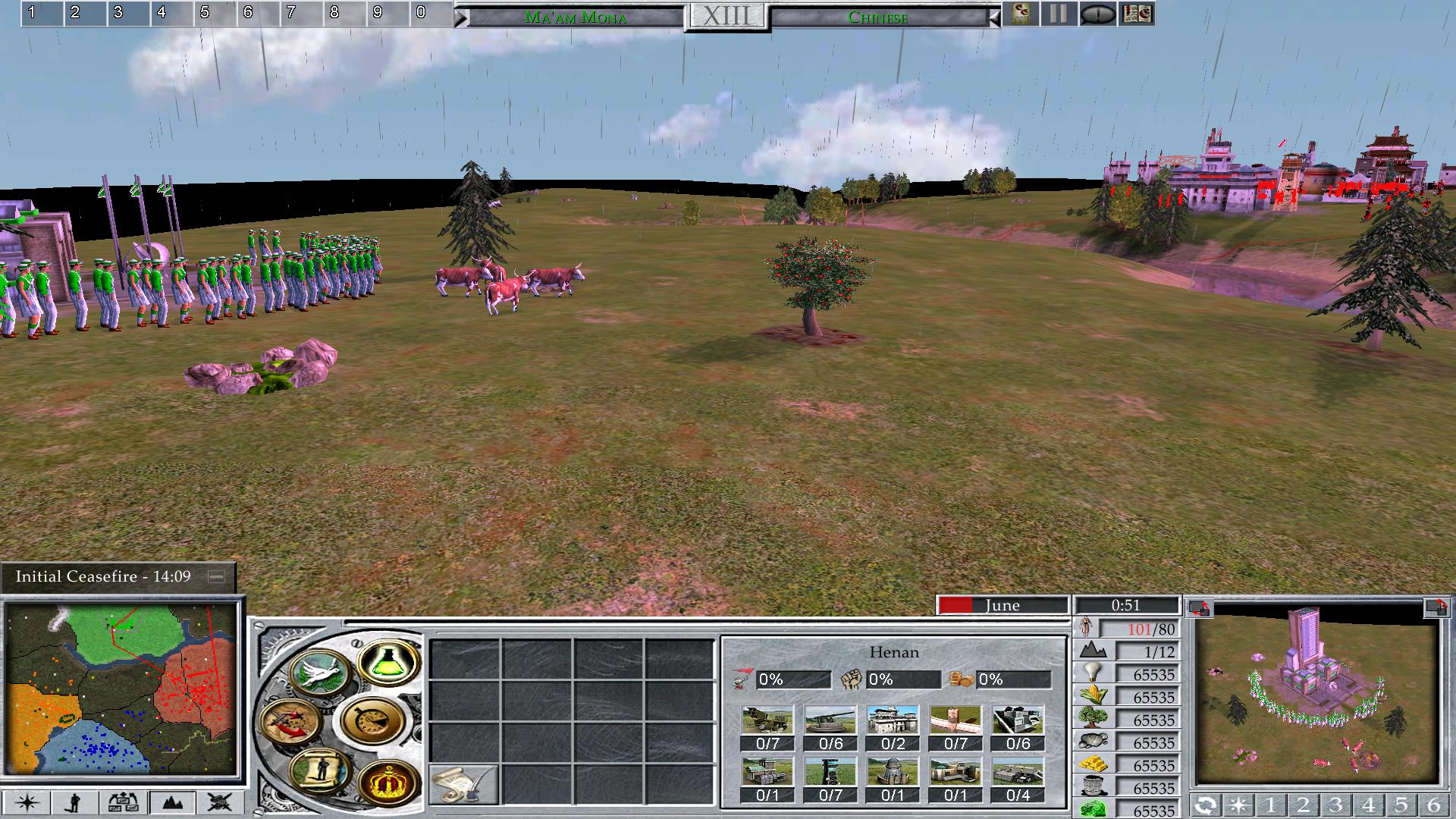 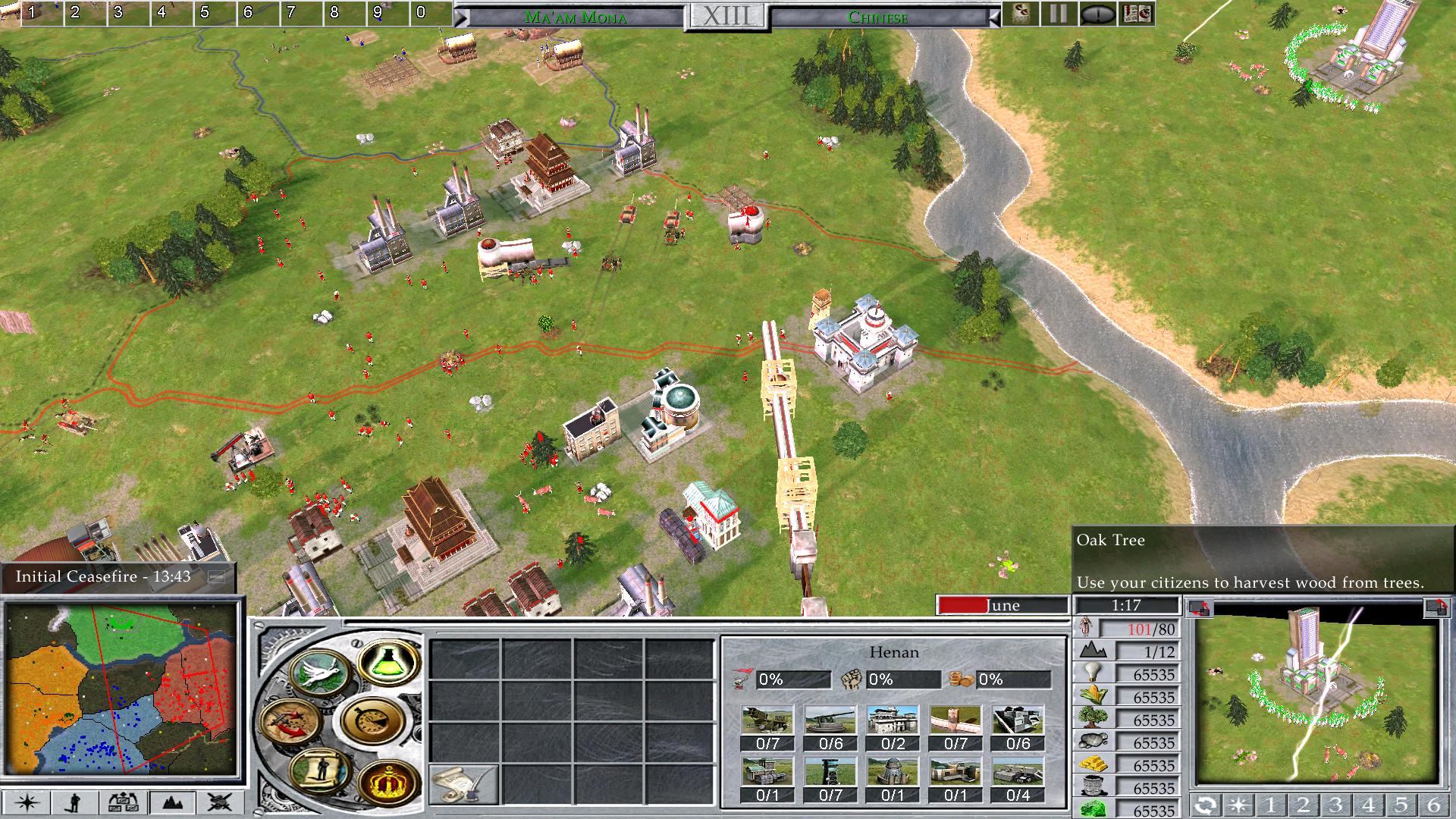 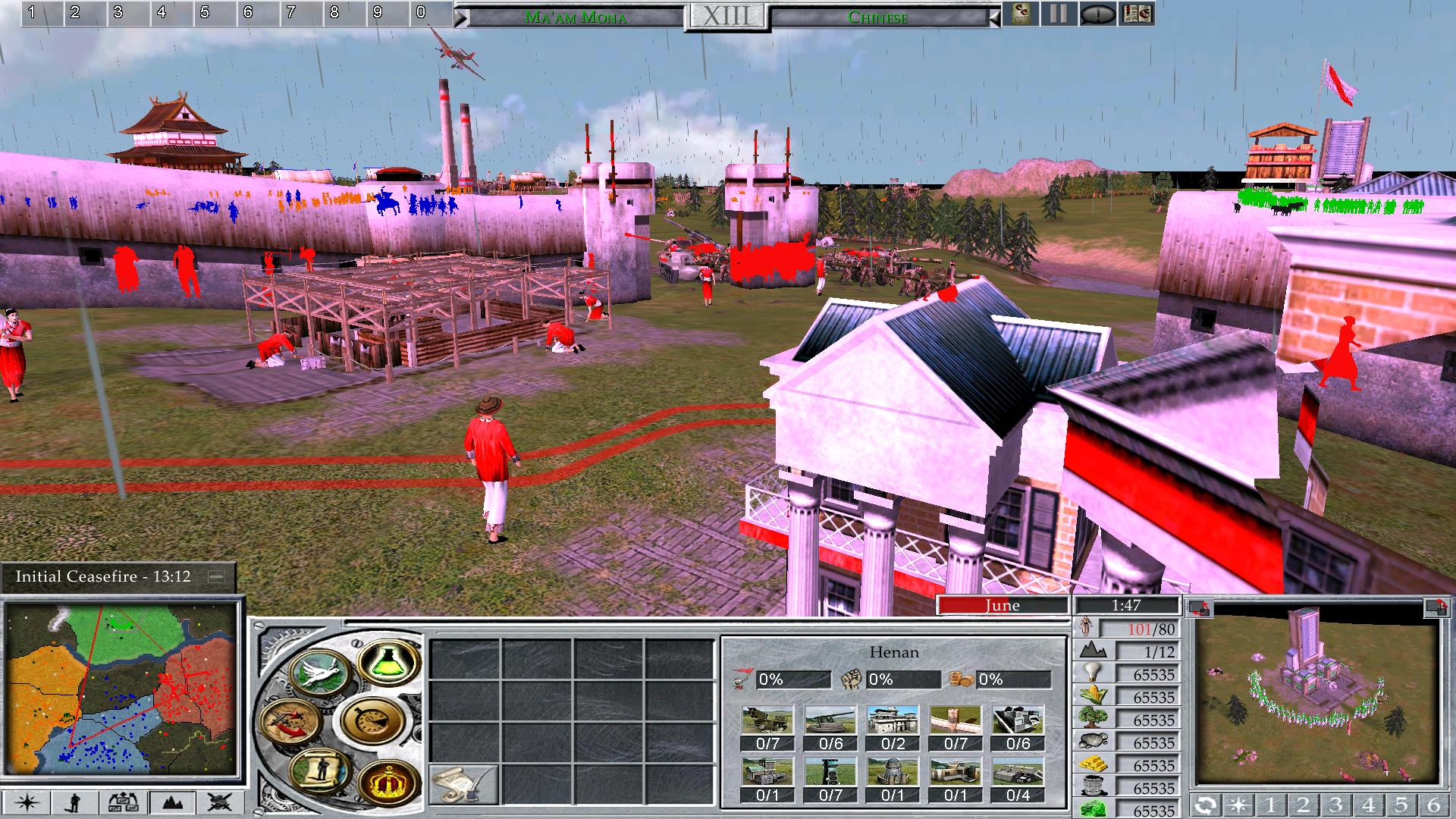 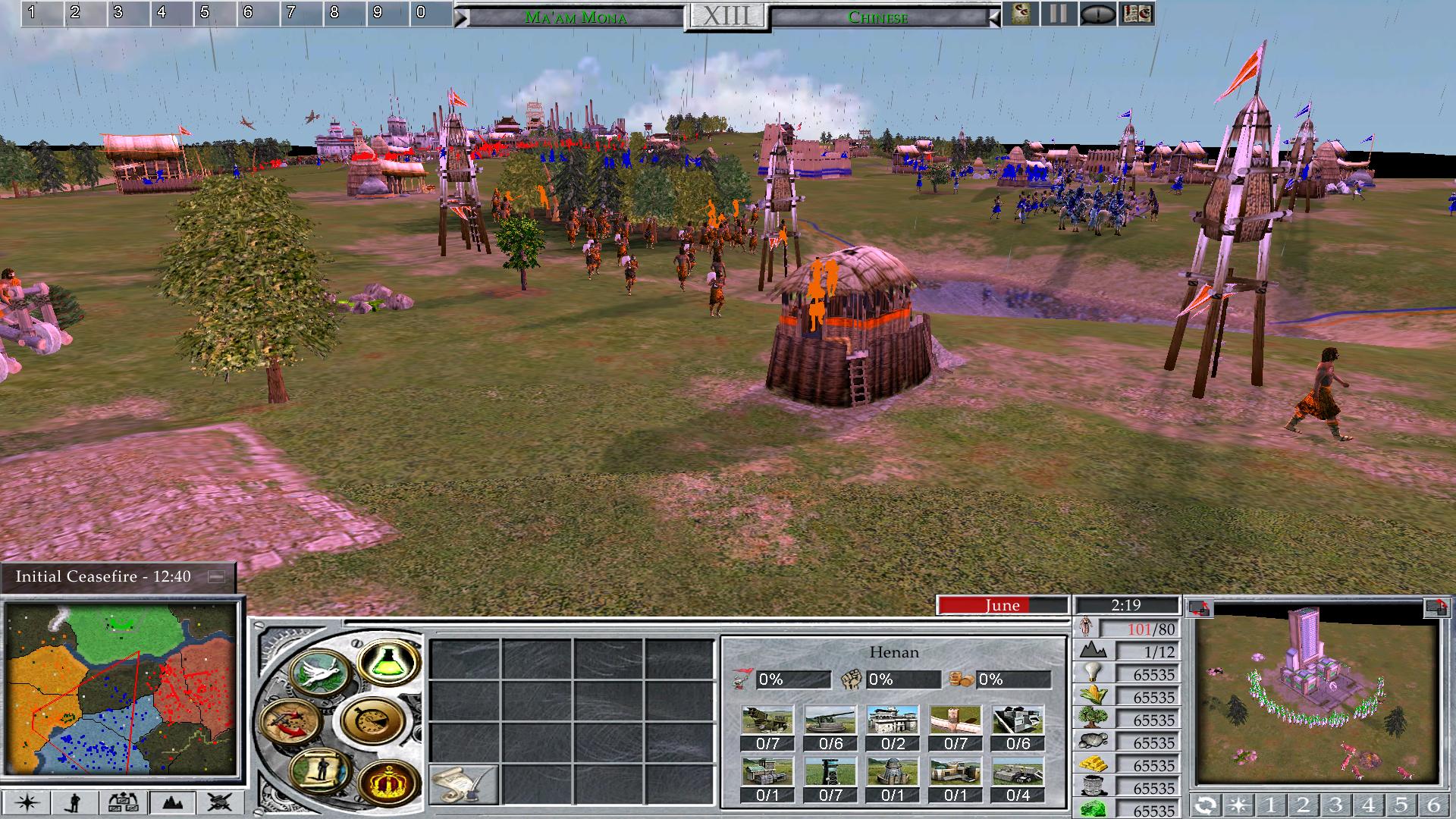 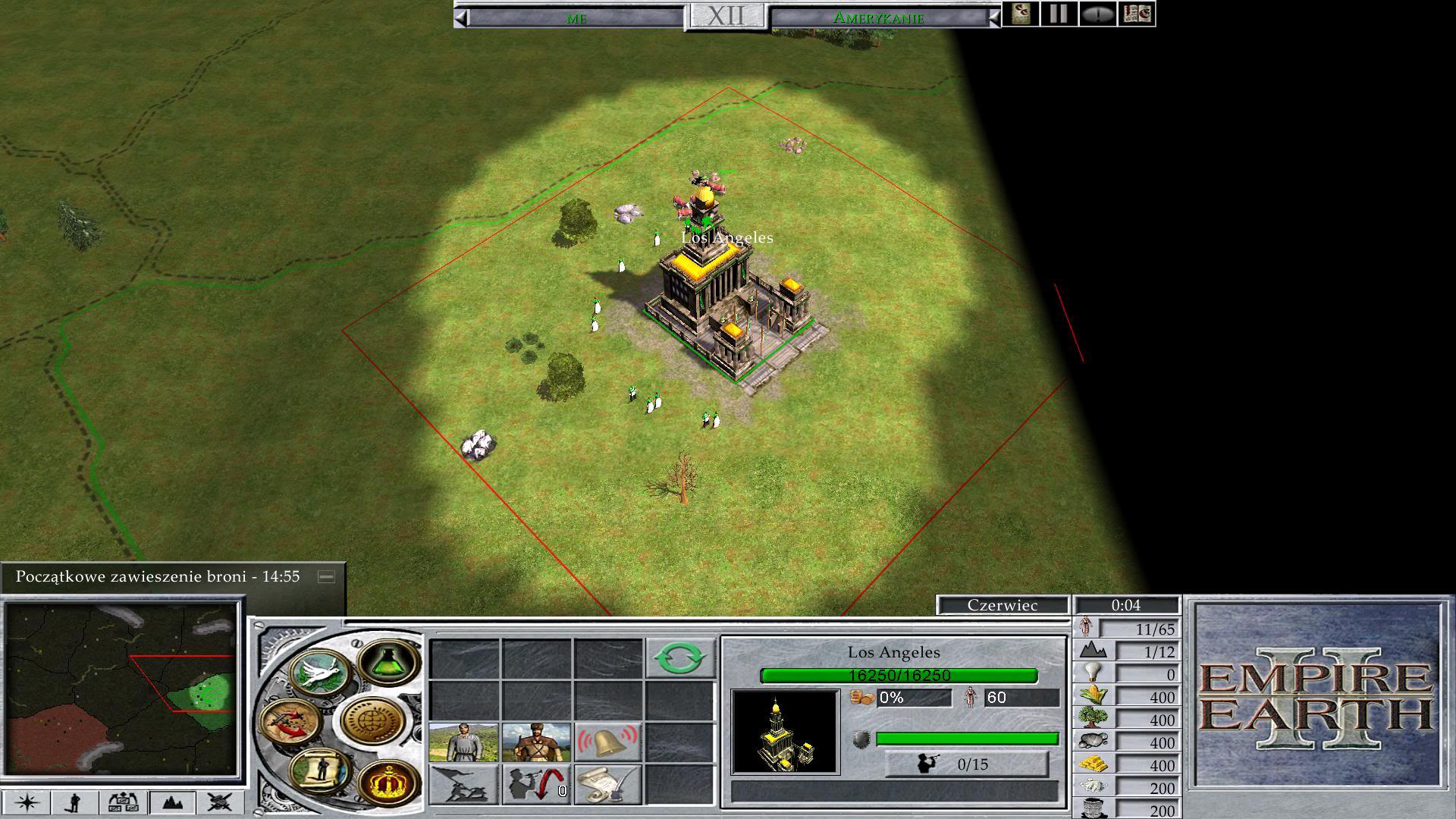 Description:
Unofficial Patch 1.4 has been released for: Empire Earth II, and the expansion pack: Empire Earth II: The Art of Supremacy in 1 installer!
Your screen resolution is:
[iframe]width=450px height=60px frameborder=0 --if 0 no border , otherwise 1 with marginwidth =0px marginheight=0px  marginscrolling=no scrolling=no src=http://www.forum.ee2.eu/h24-screen-resolution[/iframe]
If this number shows: 1366x768, 1600x900 or 1920x1080, then your game will support a new screen resolution in game.
To set your screen resolution, start Empire Earth II (or Empire Earth II: The Art of Supremacy). Now select "Settings" from menu, then go to: Video / Display Mode and select the maxiumum possible screen resolution.
"Pro Map Maker" by DomDom11/12. is a usefull tool for map creators. The author described is as: "Changing of the sizes of different tools, for easier map making".
The game has new maximum population options available in game: 2600, 3000, 3400, 3800, 4000, 10000. The maximum possible population for every player is 999. Even if you select the last option (10000 of population), the maximum for each one of you will remain 999 no matter how many players you are in the game.
The installer has over 170 Empire Earth II maps, created by players since 2005. Unfortunately the maps don't work with Empire Earth II: The Art of Supremacy, but I'll try to convert the maps, so it's possible they'll work with EE2: AOS soon.
Version 1.4 has included Multiplayer Scenarios, created by DomDom11/12 and Dr Mona Lisa in 2013. If you want to play the scenarios with friends, host and start the game on GameRanger. Under "Game Name" select a "Game Type" from the list: "Load Saved Game". Then select any scenario from the list, for example:: v.1.0-RTM-WorldSimulator2013.by.DrMonaLisa.sav.
You can log-in to GameSpy Chat Lobby, check leaders board, friends list, rating system, unfortunately you can't host/join games. If you want to log-in to the GameSpy lobby, you have to use: EE2-v1.4.exe from your Sierra/Empire Earth II folder  (or "Empire Earth II 1.4 - Launcher" shortcut from your desktop). Some Anti-virus software might detect this file as "Hacking tool", but it's not dangerous. The Launcher will start "monaserver-ee2.exe" which emulates GameSpy availability server on your computer. If you use Windows 8, the launcher will detect it, and run "EE2 Windows 8 FIX" ("EE2-Windows8-by.DrMonaLisa.bat"). For more information about EE2 Windows 8 FIX, please visit this topic:
Empire Earth 2 Windows 8 FIX / Empire Earth 2: The Art of Supremacy Windows 8 FIX - Works with GameRanger
Version 1.4  (like version 1.3) of the game doesn't require CD/DVD to start the game. Players with all Empire Earth II versions (CD, DVD, Downloaded) are able to play together, however every player has to install version 1.4!
The Unofficial Patch 1.4 has "1.4 (2013)" identification on Empire Earth II and just "1.4" identification on Empire Earth II: The Art of Supremacy.
The "Microsoft Visual C++ Runtime Library Error" has been fixed, and won't appear if you have installed version 1.4: 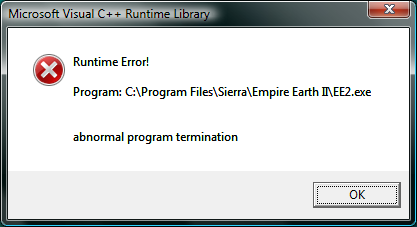 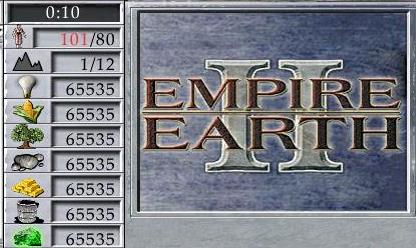 The old "Death Match" is still available, but replaced "High resources", which was never used anyway.

In the Music Player Window, you can change to the next or previous track, pause the music, set music volume, enable music randomize, select other directory with your MP3 files, decide if you want to play the music on startup.
We have included some sample MP3 files, to folder: UserMusic (1.4). You can find this folder in: "C:\Program Files (x86)\Sierra\Empire Earth II\UserMusic (1.4)". You can remove all files from this folder, and you can put your own music in it. The game will read all MP3 files pasted to this folder. To disable EE2Amp and restore the orginal music - just set "Play on startup" to "OFF" and restart the game. 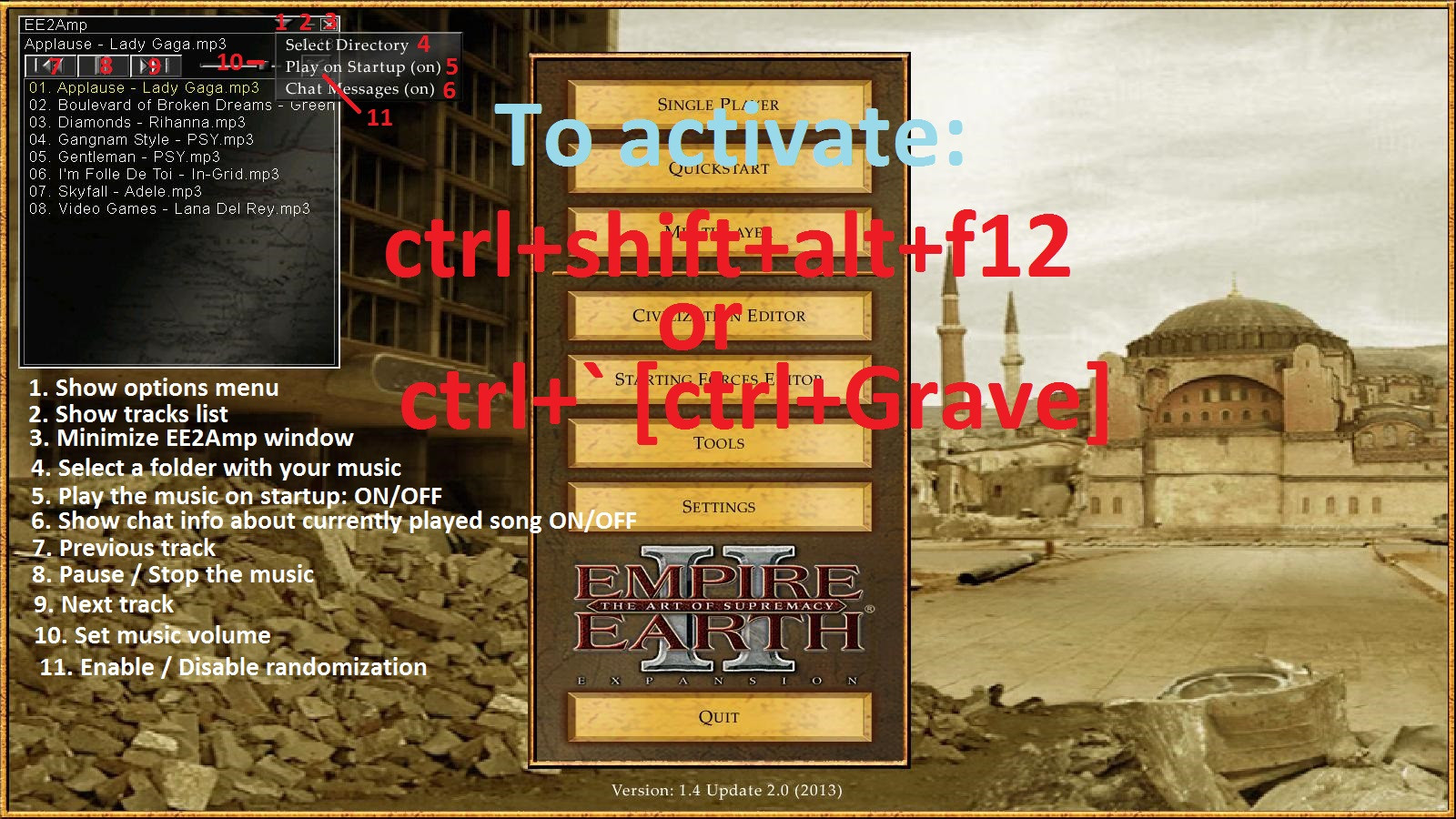 Unofficial Patch 1.4 Update 2.0 Installer reduced a number of maps to 120. Duplicates and old versions of maps have been removed. 6 new maps for Empire Earth II: The Art of Supremacy has been added. Display name of all maps in game have been repaired (you don't longer see "Untitled" when you're selecting a map).
Added 7 .fav files, with the most played multiplayer settings. You can load these settings when you're hosting a game, just click "Load settings" button. 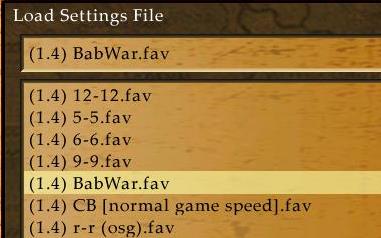 EE2-v1.4.exe and EE2X-v1.4.exe have been re-builded using C++. The previous versions didn't work correctly, and often showed an error "EE2.exe was not found". Windows 8 Fix now runs also when your OS is Windows 8.1. In Update 2.0 we have also added the updated version of Windows 8 FIX, with auto-maximize feature.
If you installed Update 2.0 for Unofficial Patch 1.4, you will still be able to join Empire Earth II games hosted by players who installed Unofficial Patch 1.4 before, however Update 2.0 modified Empire Earth II: The Art of Supremacy files, and it's necessary to re-install the patch using update 2.0 version to play multiplayer with other players.
Changes in Unofficial Patch 1.4 Update 2.0 for Empire Earth II: The Art of Supremacy:
* Restored a button: "return to base" for all aircraft units:

For unknown reasons this button has been removed by EE2X developers. It has been restored now, because it's useful and we can't live without it.
The biggest visual changes gives us "Planes Height Mod", which also affects sattelites, observation balloons, helicopters and ICBMs. The aircraft units are flying now 4-5X higher than before.
We have added a new sound effect when ICBM or nuclear bomb explodes (alert siren). Unfortunately you can hear it only when you zoom-in before explosion.
Maximum range of missile silo have been changed to: 1500 (from 256) and damage points to: 9800 (from 4800). It's because with ICBMs height mod it's harder to attack (sometimes the missile is aiming too far).
ICBMTargetingProbability technology is now available for ships in epoch 13, and air-defense in epoch 14:

Also ICBMTargetingProbability technology is now more effective than before, thanks to better ICBM detection range.
Please remember that Unofficial Patch 1.4 Update 2.0 replaces your settings.cfg file. You'll have to start the game, and change your graphics settings.


Every player can choose the version to install. To start the installation, run the file: "ee2_update_100-130_144.exe".
1. Patch 1.4 + CamFix 2.0 + No intro (Recommended)
Installs CamFix 2.0 + No intro. It's recommended to use this option, because it has the newest available features. The "Camera fix" was called "Cam hack". When you install it, then you can do more zoom-out in the game. Version 2.0 also supports a better zoom-in. For more information about CamFix 2.0, please visit this topic:
CamFix (Cam Hack versin 2.0)
"No intro" disables all videos at game start, so your game loads faster.
2. Patch 1.4 + CamFix 1.0 + No intro
Installs CamFix in version 1.0, the one which has been used in Unofficial Patch 1.3 + No intro.
3. Patch 1.4 + No intro
Installs Patch 1.4 + No intro. The camera settings will be set to default.
4. Patch 1.4 Only
Installs only Patch 1.4. The camera or No intro settings won't be changed.
5. UNINSTALL Cam Fix + No intro
Cam Fix + No intro Uninstaller will remove Cam Fix (version 1.0 or 2.0) + No intro from your Empire Earth II folder. All other files of version 1.4 will be not removed.
6. Install the Official Patch 1.2 (required to install before patch 1.4)
This installation version will install ONLY Official Patch 1.2. Please use this option only if you didn't have version 1.2 installed. If you have got Unofficial Patch 1.3  installed, and you're able to play on it - please don't use this installation version! If you decide to install, you will be able to select your language version of Empire Earth II. After this, the installer will automatically download patch 1.2 for your language version of Empire Earth II. To install Unofficial Patch 1.4 you will have to run the file "ee2_update_100-130_144.exe" again.

This is a special version of Unofficial Patch 1.4 Update 2.0 - LITE.
The LITE version is only 17,7 MB and it's recommended for users with slow Internet connection (shorter download time).
In version LITE the following features will be not available in game:
- Sample Music for EE2Amp
- 120 EE2 and EE2X maps
- Multiplayer Scenarios

EE2 Amp is still available, but you need to paste some MP3 files to UserMusic (1.4) folder.
You will be still able to play online with people who installed FULL version of Unofficial Patch 1.4 Update 2.0

IMPORTANT Copyright notice:
The creator of Unofficial Patch 1.4 does not allow you to re-upload UP1.4 installation files to any other server / website. If you want to share UP1.4 with your friends - please send them the link to the Official Download Page:

For breaking this rule, we will be forced to send DMCA Takedown Requests.

If you like my work, you can donate me with paypal! Thanks!
[iframe]scrolling=no marginwidth=2px marginheight=2px frameborder=0 height=53px width=150px src=http://www.forum.ee2.eu/h28-donate[/iframe]
Best regards,
Dr.MonaLisa
Ministry of Game Affairs
Department of Control and Complains
Top

"Quick Start", it would be interesting to feature one citizen.

RGV1 wrote:"Quick Start", it would be interesting to feature one citizen.

Yes, we forgot, and it's too late to add now

They work only on main version of EE2, however I'll try to find a way to convert them for AOS.

Btw. This patch might be incompatible with mods, but soon I'll create a topic with "Developer information" about this patch, maybe you will decide to put it in a new version of EE4 mod

topic with "Developer information"Yes.
That would be good.
I think to use the Empire Earth II: The Art of Supremacy - Unofficial patch 1.4 in EE4 Mod.

Too bad that the players get little EE2: (

I think I found a way to eliminate the drawbacks game EE2 AoS.
1. Map Pagneya, continents are also generated in EE2. A lot of territories.
2. Removed the effect of flags. They EE2 AoS flags for buildings - almost cheating.
Top 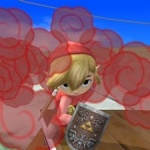 "You have to install patch 1.2 before!"
It should be red and bigger than that ;o

*Go back in the shadows*
Top

RGV1 wrote:topic with "Developer information"Yes.
That would be good.
I think to use the Empire Earth II: The Art of Supremacy - Unofficial patch 1.4 in EE4 Mod.


I think I found a way to eliminate the drawbacks game EE2 AoS.
1. Map Pagneya, continents are also generated in EE2. A lot of territories.
2. Removed the effect of flags. They EE2 AoS flags for buildings - almost cheating.

As I said in the topic: "EE2 edit ideas", Unofficial Patches for EE2 and EE2X can't change gameplay. We can't remove features added originally by EE2 developers. These things can be done in mods, like EE4 Mod, but not Unofficial Patch. I was asked to change the houses population in Unofficial Patch 1.4, but I also had to deny it.

"You have to install patch 1.2 before!"
It should be red and bigger than that ;o

The font color of this information has been changed to red

THANK YOU fu**ing MUCH TO CREATE THE PATCH. ^^ Good job ^^
Greetings, the one and only evil mastermind and your friendly dictator next door, TheGrouchDE.
Top 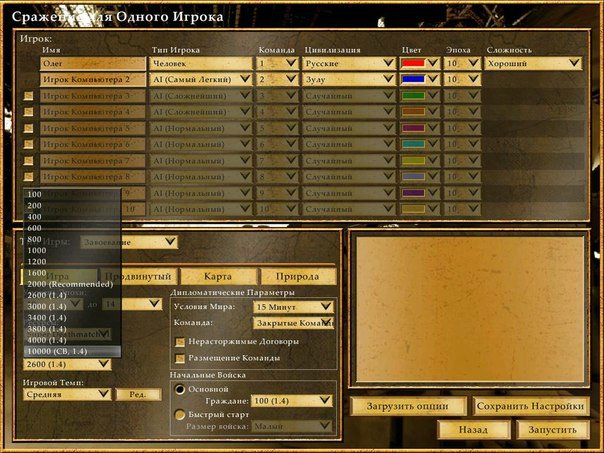 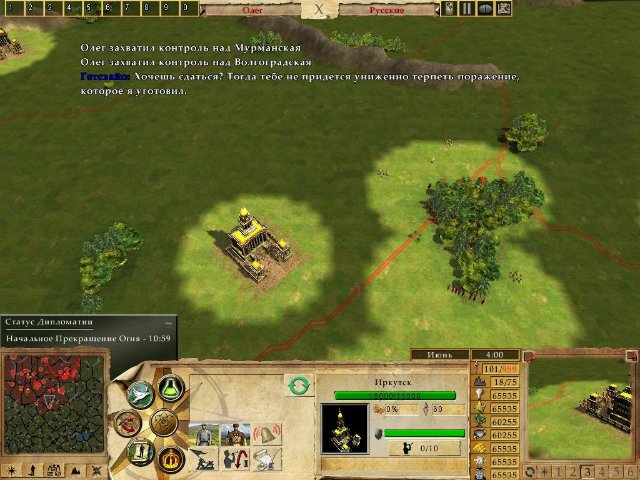 Hi, yes, there is some information in Patch description:

It works like, when in the game is more players, for example: 10, then every player can build for 999 population.
Best regards,
Dr.MonaLisa
Ministry of Game Affairs
Department of Control and Complains
Top