Banning Zapper? Should it Happen?

Banning Zapper? Should it Happen?

I was told to start a new chat hear. I'm *Eeg*|Doggy> for those of you who didn't know and or hate me.
To begin, I was told by a fellow clan mate through text that he was smurfing on eeg accounts when he has NO acquaintance what so ever to the clan. None of the leaders approved and he isn't even on the eeg site as a member. I've come down to conclusion that he is the one that hacked my accounts and further more possed as me making me look like an asshole and causing me disrespect for the past 2 years now. Finally I know truly what happanded in those 2 years and who was the one always trying to be me. I would like this unrespectful little bs pshyco off the game for my safety because he seems like he could hack other people and of course being kind as I am , don't want him to ruin any other persons accounts for his personal benefit and to make the fair players sad and un enjoy the game. I believe playing ee2 should be fun and safe without being hacked or abused (Redline) So to end my paragraph, I would like Zapper removed from ee2 and permanently banned for the safety and enjoyment of the other players that play the game.
Thank you.
-Sparkzzz
-Doggy
-*Eeg*
-Doggyfighter
-OldDoggy

This case has been sent to the Ministry of Justice.
I'll show logs in free time
@Leader
Top

Okay.
At first - I'm sure he won't be permanently banned for that.
It's problem between you and him, and we can't ban all his accounts, just because he acted like you. It's not my decision anyway, but in my opinion you expect too much from the government.

As I said it's not my decisision, because I have nothing to the Ministry of Justice, but I'm sure Matty won't accept something like this.
So everything we can talk about in this topic is to ban his accounts if *Eeg* tag is in it.
I checked in EE2 Status Center: 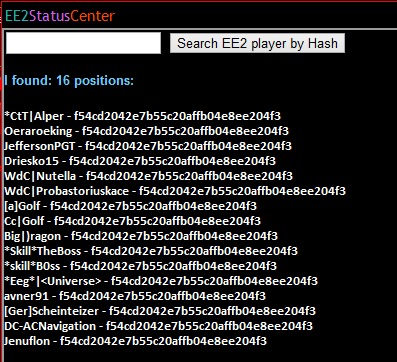 Everything he used was: *Eeg*| account.
I also checked logs.

I was talking with him on the Xfire, and it was like:
- Eeg remember asked him: "Are you doggy"
- Alpert answer was simple: "yes"

So yes, he used *Eeg* account illegal, and it can be reason to ban that account: *Eeg*|
But not to ban all his accounts.


EDIT:
We have no proof that Alper hacked one of Doggy's accounts. The account he used was created by him.
Best regards,
Dr.MonaLisa
Ministry of Game Affairs
Department of Control and Complains
Top

Leader wrote:
I was talking with him on the Xfire, and it was like:
- Eeg remember asked him: "Are you doggy"
- Alpert answer was simple: "yes"


That's true, i was the member (you wrote remember instead of member you fool) who asked him if he was Doggy. He just answered "how did you know?"


I'm sorry for my errors. I was riding on the bike and I made 30KM. When I back home my heart pulse was still +190 xD
Top

Um what do you mean... the account he created was his? Are you talking about the one that he actually hacked from me, then changed his name to dragon something on it?
Top

Doggy, please tell the full nickname of your account, which you think he hacked.
Everything can be checked in the EE2StatusCenter.
Every player has his own "hash". If you create an account with this hash it will never change.
So for example if he hacked your account, then changed the name - "hash" would be same. So you would see it as your account, even if you didn't change the name.
If you don't see this account with your "hash", then he didn't hack, and he didn't change the name.
Best regards,
Dr.MonaLisa
Ministry of Game Affairs
Department of Control and Complains
Top

I'm not sure I completely understand you. The name he hacked though when you log in with the name was Old > Doggy Doggy <
Is that what you are asking?
Top

Are you sure someone hacked it? Maybe you just forgot the password? Why Alper would do this?
Best regards,
Dr.MonaLisa
Ministry of Game Affairs
Department of Control and Complains
Top

Lol It was hacked... I wouldn't have forgotten it, if its the same account I use everyday.
Top

And when did you try the last time?
GameSpy has problems, and I've informed about it on the Twitter: https://twitter.com/EE2News

~eW`~FORUM ‏@EE2News
If your EE2 account doesn't work - Please contact to Dr.MonaLisa on the Private Message, forum or e-mail: president@easywinclan

It's known issue. Already 4 players cannot access to their accounts, for example: VLADISLAV and TheGrouch. All accounts HASN'T been hacked.

So it's possible you have exactly same problem as VLAD or TheGrouch (anyway I saw TheGrouch on the EE2 today).
And tell me - You say you used it everyday... If you did, then it's impossible that BOT didn't register it on the HASH list. This account couldn't be online for longer than 9 months.

Anyway, tell me an e-mail you used in that account. I'll check everything.
Best regards,
Dr.MonaLisa
Ministry of Game Affairs
Department of Control and Complains
Top
Locked
18 posts