by Bogdan
Hello again! I don't know exactly if it's the original game's problem or not, but I'm very annoyed with the fact that skirmish games or build in scenarios can be speeded up and the custom scenarios don't

When I'm playing custom scenario (not test mission) and pressing the keys which are linked to the speed up/slow down game pace commands, nothing really happens.

Is there a way to fix this?

- Game Pace ("Game" tab on the setup screen): decides how fast units are produced, resources collected, buildings constructed, how much health units have and how easy it is to kill units, etc.

It's impossible to change game pace in a started game.

If you're creating a custom scenario, then you're supposed to edit game pace by the .ies script. For more information, you can refer to Scripting Docs\EE2 SCRIPTING.doc, for example:

I don't know if there is any easier method of setting the game pace in custom scenarios.

by Bogdan
Oh, I was talking about game speed. Just messed up these definitions

Added after 7 minutes 3 seconds:
It’s strange that it can be changed everywhere, but not while playing custom scenarios

by Dr.MonaLisa
Ehhh, you forgot to give an important detail, that you're playing AOS. This is a bug only present on EE2: AOS, where scenarios (even campaigns) have option "Lock game speed" enabled by default. On the normal EE2 it works correctly.

This was possibly an intentional change committed by AOS developers, due that changing game speed might negatively affect execution of .ies scripts.

I was explaining this issue so many times on the Support Chat, that I am starting to regret that it exists (Support Chat). If those issues were always discussed on the forum, people would be able to find useful information faster.

So basically, the issue is not related to UP1.5.
This can not be fixed by editing scenario files with a text editor and changing the value at some address, because the game verifies every f***king single byte in game saves / maps / scenarios. Basically, any single modification will throw an error on load.

This issue could possibly be fixed by hacking memory by the Launcher (Maximization Helper checkboxes), as it's done with:
- Don't center camera for "Cycle Select" hotkeys
- Reduce visual weather effects for Blizzard, Sandstorm
- Disable audio taunts in multiplayer chats
- (Allowing observers to chat with players in unrated, Multiplayer games, server controlled switch), etc.
So basically the Launcher has advanced functions (YES, THEY'RE ADVANCED NO MATTER WHAT NEGATIVE THINGS PEOPLE TALK ABOUT THE LAUNCHER).

Theoretically it should be possible to find the right memory address, after few weeks of researching... but:
- It's a long, boring process.
- 99% of players don't even know that change game speed hotkeys exists.
- 90% from the remaining 1% never plays campaigns, and if they do, they rather keep the same game speed.
- Less than 1% from those players will try custom scenarios, or will be interested in creating new ones.

So yeah, this is quite demotivating to spend so much time for a bug that is not noticeable for ordinary users. I will probably still fix it in the future... as I always do, but I don't want to put some special focus on it.
AOS in general has a shitty continents map generation, broken Pangea maps, and many more annoying bugs... It should have received at least 1 official patch, but it didn't :/

by Bogdan
Ok, but I'm not playing AOS. I'm playing original EE2. I agree it's a complicated issue that is not interesting for most people, though.

by Dr.MonaLisa
Oh, that's strange. I thought scenarios on the normal EE2 are unaffected. It seems that changing game speed works for the original EE2 campaigns, but not for the new scenarios.

I've some good news. Incoming update 158006 will have the following new feature:

- New feature: Maximization Helper has an option named: "Unlock Game Speed Change hotkeys in scenarios":
* Unlocks the game speed change hotkeys (by default - and +) in games where option "Lock Game Speed" was checked, or Campaign Missions / Custom Scenarios where game speed is locked by default, with no possibility to unlock.
* To prevent abuses, this option is grayed out when you're in a Multiplayer game.
* Changing the status of this option has an immediate effect (no game restart is required). 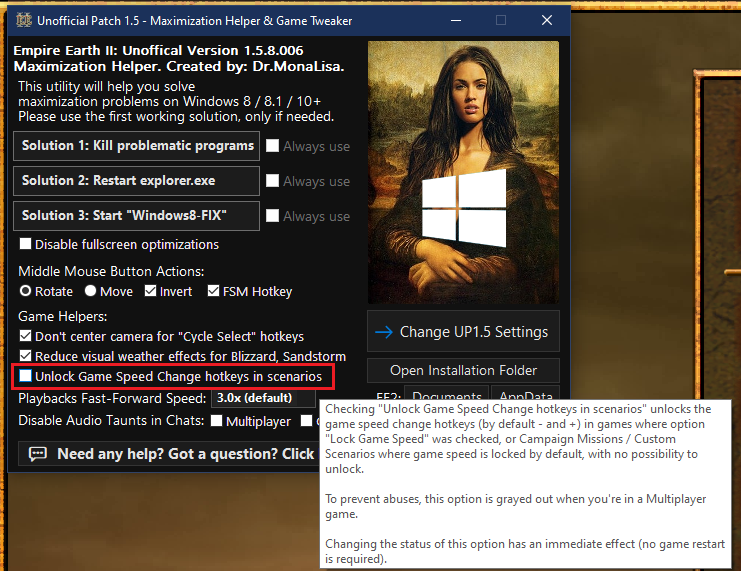 The update should be released soon, maybe even today as it also contains an important multiplayer improvement.

by Bogdan
Wow, that’s awesome! I guess you spent a lot time for this feature, so it’s pure magic

by Dr.MonaLisa
To be fair it wasn't that time consuming. I searched for the place where it prints a message about changing the game speed, then figured out what "jump" should i skip. Launcher modifications also weren't hard because I already had functions like this one (Cycle Select Hotkey, Reduce Visual Weather Effects). So I just moved things, added a new checkbox, and voila! I already had coded getting multiplayer/singleplayer status few updates before, so that also wasn't problematic. I think in total I only spent 3-4 hours on it.

The biggest improvement was my mental change how this thing should work. In attempts before I tried to fake the status in game saves /scrnario files. This time I just decided to "hack" the status of Lock Game Speed option, and it worked